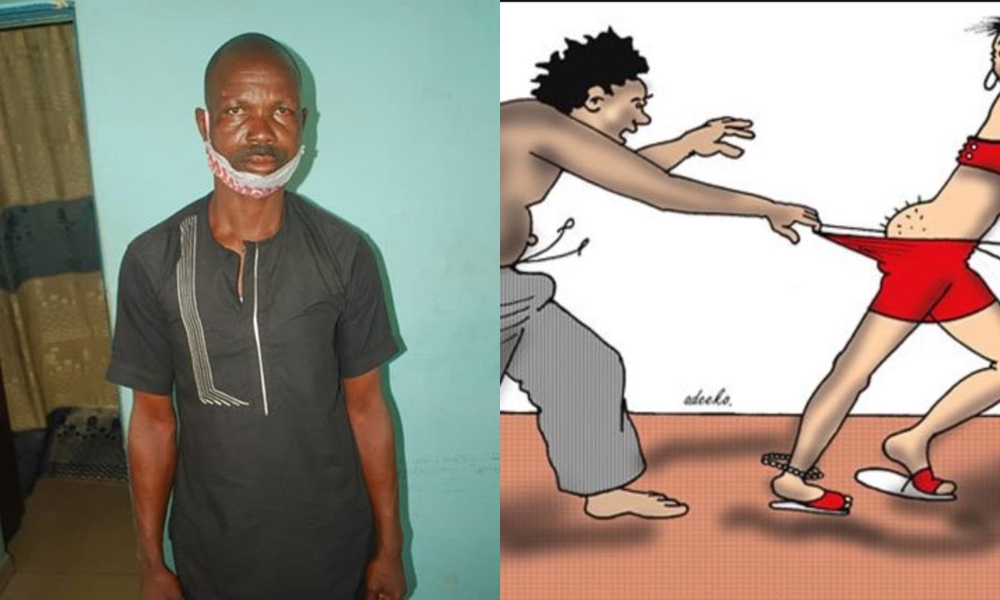 A 50-year-old father, Peter Ayemoba, has been arrested by the police for having carnal knowledge of his daughters.

Ayemoba told the police during interrogation that he had been sleeping with his daughters since his wife died about seven years ago.

He said that sleeping with his daughters made him feel close to his late wife, adding that the romps he had with them allowed them to bond more.

“I started sleeping with my daughters about seven years ago when I lost my wife in 2013.

“The death of my wife got me so confused that I did not even know when I started sleeping with my daughters.

“In fact, I don’t know what has come over me.

“The death of my wife devastated me to the point that I did not know what I was doing.

“I suspect that somebody placed a curse on me because what I have done in the past seven years is not ordinary, frankly speaking.

“What I did after my wife’s death was to bond with my children and they became closer to me until gradually I started sleeping with the girls.

“Honestly, I cannot explain why I should do that to my own daughters. But there was a spirit that kept telling me that I would not be the first man to sleep with his daughter and as such, I should not worry too much about it.”

Ayemoba insisted that he got the consent of his daughters before sleeping with them, adding that it was with their consent that the relationship continued even after he took a second wife.

“After my wife’s burial, I started having feelings for my daughters. I would go to their room and play with them until it metamorphosed to having sexual intercourse with them separately on a regular basis but with their consent.

“Whenever they rejected my sexual demand, I would tell them that I wanted to be closer to them since their mother was no more.

“At times I would threaten to kill them and commit suicide if they did not allow me to sleep with them.

“One day, I had to refer them to the Bible about Lot who had sex with his daughters and was not punished by God.

“I told them that the intercourse between a father and his daughters was normal and it is written in the Bible.”

The father of six said his second wife was not aware of his romps with his daughters, neither did his four sons know about them.

He added that his daughters probably did not tell his second wife because they were not close to her.

“My daughters, after noticing that I was doing something abominable, forced me to get another wife that would satisfy my sexual urge. But despite the marriage, I still made love to them at the slightest opportunity my new wife was not in the house.

“Honestly, what is happening to me is not ordinary. I need to go out to sort myself out either physically or metaphysically so that I will have peace of mind.”

Apparently tired of the sexual demands of their father, the girls decided to report to a family member who turned him in to the police.