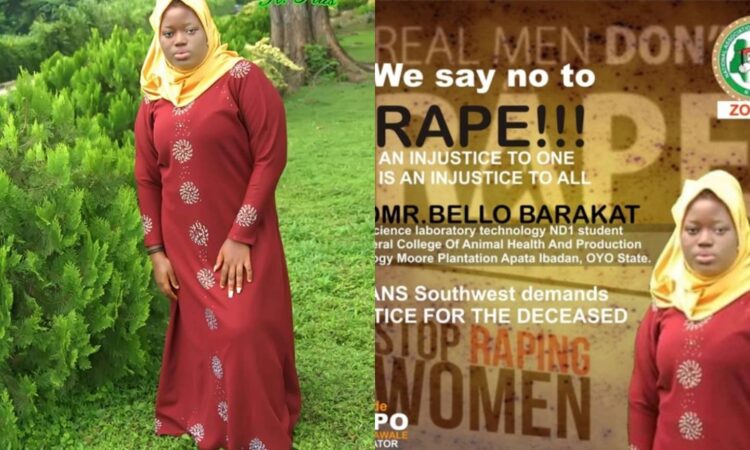 An 18-year-old girl, identified as Bello Barakat, was reportedly gang-raped and murdered by unknown men in Ibadan, Oyo state.

The incident was said to have occurred on Tuesday in Akinyele area of Ibadan, Oyo state.

It was gathered that her dad found her dead body around their home, after her body was examined, they discovered that she was raped, then she got murdered.

Bello Barakat, aged 18, was a year one student of the Federal College of Animal Health and Production in Ibadan.

It was gathered that she has been buried according to Islamic rites.

Meanwhile, National Association of Nigerian Students (NANS) Southwest, zone D has demanded justice for the deceased who was assaulted and murdered.

Her death has continued to attract outrage nationwide as Nigerians have taken to social media to express their displeasure over the rising cases of Rape in Nigeria with the hashtag #JusticeforBarakat.

Recall that Ms Omozuwa, a 100 level Microbiology student of the University of Benin, was assaulted inside a hall in the Redeemed Christian Church of God (RCCG), Ikpoba Hill, Benin City on May 27, where she went to study.