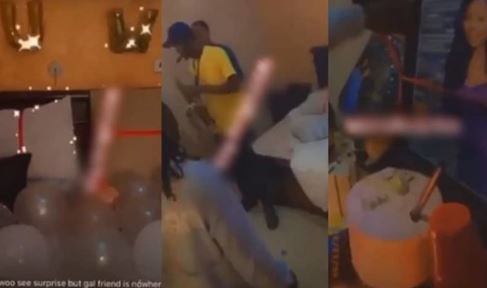 A young man who planned a surprise birthday party for his girlfriend at a hotel in Benin, has been left devastated after he caught her with another man at the same hotel.

It was learnt that the girlfriend had asked her boyfriend for money to celebrate her birthday, but he said he had no money but all was part of the plan in pulling off a birthday surprise

However, on her birthday, after planning a birthday surprise at a hotel in Benin, he went to her house to pick her up so they can proceed to the hotel, but he met her absence.

Afterward, he was able to get the location of the hotel she went to after bribing the girl’s mother, only to find her at the hotel with another man.

Watch the video of the shattered surprise birthday party below;

The final words of BBNaija, Khafi’s brother, Alex after he was shot, and died