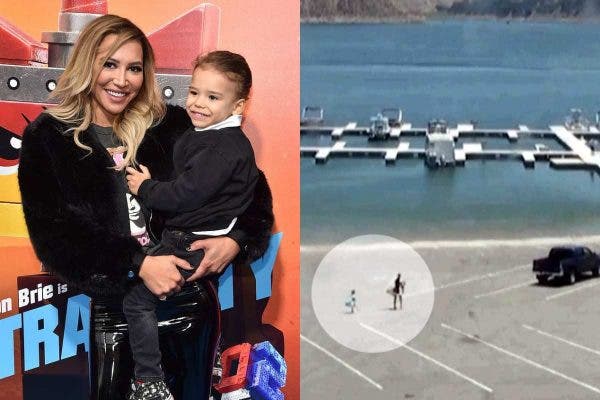 Theinfong reported earlier the disappearance of actress Naya Rivera leaving behind her four-year-old son on a boat. A CCTV footage released by the police shows the moment the Glee actress and her son Josey arrived at Lake Piru and rode away in a boat before her disappearance.

33-year-old actress, Naya Rivera is missing and presumed dead after her four-year-old son was found floating on a boat alone on Lake Piru in California.

The Ventura County Sheriff’s Office released the footage which showed her arrive at the dock before traveling north in the lake.

“This is the recording from the security camera at the boat launch when Naya Rivera and her son arrived to rent a pontoon boat at Lake Piru. The video will show them departing the dock and travel north in the lake,” the Ventura County Sheriff’s office said in a statement.

In the video, Rivera and her son Josey can be seen arriving at the Lake in her SUV. The actress parked her SUV and walked to the dock with her son Josey behind her.

As they head for the pontoon to find the boat that Naya had hired for the day, one of the pontoon boats can be seen pulling away from the dock and handing them the keys for their rental before they embarked on the trip.

Naya Rivera’s son told police that his mum “jumped into the water but didn’t come back up” as the search for her continues.

According to TMZ, police sources claim Josey said that his mother had “jumped into the water but didn’t come back.’