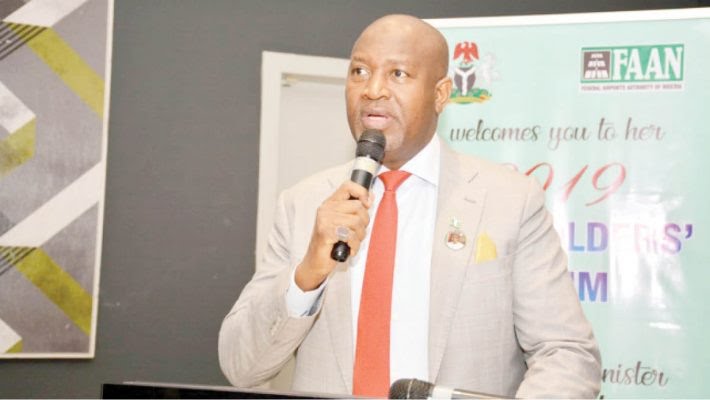 According to the reports, the Minister of Aviation, Senator Hadi Sirika last night said as flights resume on Monday, aides of VIP passengers would henceforth be stopped from accessing the terminal.

Sirika said airport officials have the right to stop every VIP accessing the terminal with his aides, adding, “The only VIP we cannot stop is Mr. President and he doesn’t use our terminal.”

The minister spoke last night at the virtual stakeholders’ meeting attended by representatives of all airlines and allied service providers. At the meeting, the Nigeria Civil Aviation Authority (NCAA) said any airline or aviation service provider that failed to fulfill the requirements set by the regulatory agency would not get approval to start operations, Daily Trust reports.

International flights may resume before October –…

Director-General of the NCAA, Capt. Musa Nuhu, however, disclosed that the agency would on Friday (today) begin to get approval to start flights. Sirika had on Wednesday announced that domestic flights would commence on Monday, July 8 with Lagos and Abuja airports. The meeting reviewed the readiness and preparedness of the industry to restart on Monday.

While responding to the issue of VIP aides causing a stir at the airport, Sirika disclosed that it was no longer business as usual, saying all VIPs were expected to carry their own bag by themselves. Sirika disclosed further that he had written to all the ministers, heads of government parastatals and agencies, traditional rulers, chief executives of banks, among other VIPs to update them on the new protocols.

“It is no longer business as usual. There is no more VIP consideration at the airport. Anytime I’m traveling, I have always carried my bag by myself,” he said.

Managing Director of the Federal Airports Authority of Nigeria (FAAN) Capt. Rabiu Yadudu said the authority had installed close circuit television (CCTV) in all areas of the airports to ensure safety and security and enforce compliance with all the protocols.