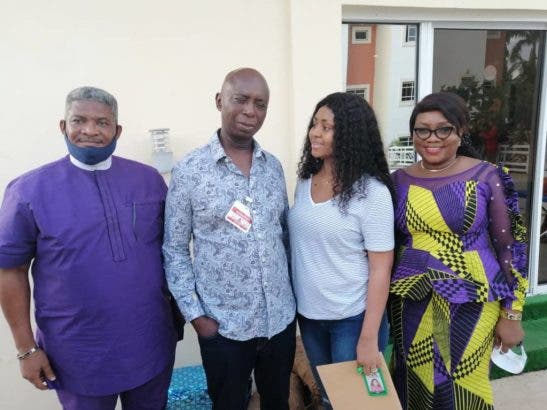 The executive members of Nigeria’s Association of Movie Producers (MPA) in Nigeria, visited the young mother of one, actress Regina Daniels and her husband Ned Nwoko, opens a bank account for their new baby.

The members of the association were well received by the latest grandmother in town Rita Daniels who made sure she welcomed them in a very traditional way.

In her words, she said that she was very happy to receive the executives and members of her association who came to share in her joy.

The Association of movie producers in Nigeria (AMP) also opened an account for the young prince Munir Neji Ned Nwoko as part of our campaign to encourage early saving and also presented a congratulatory card to Prince Ned Nwoko and his Nollywood Actress wife, Regina Daniels Nwoko.

Recall that week after the actress gave birth to her son, the Actors’ Guild of Nigeria (AGN) paid a visit to her and her family which was criticized by Nollywood actress, Lala Akindoju.

“I underwent more than one plastic surgeries because my first surgery failed”, Actress, Cossy Orjiakor opens up on what she did to her body