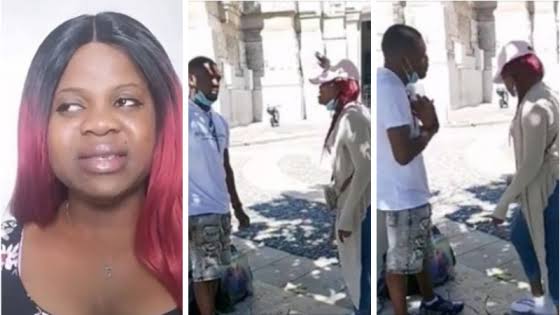 A woman who rejected her boyfriend’s proposal because he refused to kneel down to propose has reacted after the video went viral.

The woman, who identified herself as Lucia has defended her decision as she called out her boyfriend for allowing the video to go public, thereby causing people to insult her under his post.

She stated that every one has their preferences and kneeling to be proposed to is her preference.

She added that kneeling to propose is a sign of respect and may be the only time the man may get to show respect for his woman, since after marriage, she’s expected to serve the man.

She further stated that as a woman she deserves and demands that respect.

She said it would have been a different case if the proposal was private, but since he chose to make it public, he should have knelt down. She added that it was supposed to be a private moment between them and she didn’t expect people to film it and post online,

She also pointed out that if her boyfriend comes to propose to her again, he must still kneel before she accepts him.

She began the video, saying: “Its concerning the video that went viral, Yes ooo, My Boyfriend must kneel down to propose to me. He can’t stand up and say, ‘will you marry me?’”

#BBNaija: Carrying mop on your head like a clown – Erica calls out Lucy (video)