#BBNaija: “Shut up your mouth”- Ozo clashes with Prince; Misuse of power or a leadership trait? (Video) 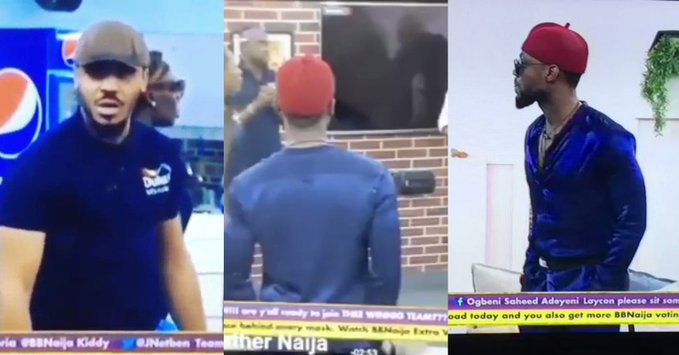 The BBNaija house witnessed another drama in its usual form yesterday as Ozo and Prince clashed in the Big Brother lockdown house.

The trouble started when Prince stood up during their drama practice and went to the room. The housemates were practicing ahead of their wager presentation holding on Thursday, August 6, and have been working really hard so they do not lose this week’s task as they have lost the previous two given to them by Big Brother.

Angry that Prince left the group while they were still practicing, Ozo who is this week’s Head of House, stood up and warned he would not tolerate such character from any housemate. Shouting on top of his voice, Ozo informed Prince he would no longer participate in the drama. When Prince wanted to speak, a visibly angry Ozo responded ” Shut up your mouth”

He instructed Prince to apologize to the other housemates for leaving the drama and Prince humbly apologized. Ozo later apologized to Prince for raising his voice.

Watch a clip from the scene below

OZO to PRINCE: Someone else will play your part in this drama. You don’t just stand up and leave! Before we continue, you have to apologize to everyone😡
#BBNaija pic.twitter.com/fDGhTIQ5db

Following Ozo’s outburst, while some people supported him others were of the opinion that is outburst may not have necessarily been about the wager but something else as they linked it with Nengi.

Lady rejects her boyfriend’s marriage proposal, insists he must be on his knees before she accepts the ring (Watch video)

#BBNaija: Men rush to me, I don’t snatch them – Nengi claims (Video)