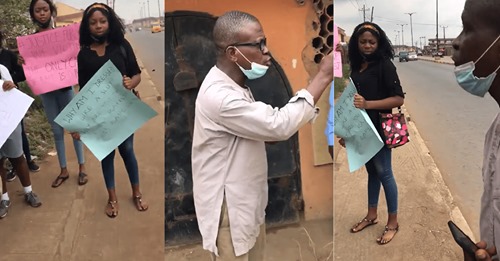 A 30-second video of a man confronting women protesting rape has got everyone fighting and arguing.

In Nigeria, only a few things can be shocking with the mysterious happenings being unraveled daily.

A video that has since gone viral, a Nigerian man is seen in front of a house confronting a small gathering of women who are protesting against rape.

Yes, marital rape is real: How my husband raped me on our…

Yes, marital rape is real: How my husband raped me on our…

Since the video has surfaced, it has called for many reactions from many Nigerians but the particular reaction and analysis made by this particular man about the whole issue has got our attention.

Go through his narration and analysis.

When I first read the headline, I wondered what was really there to confront when it came to protesting against rape, surely it’s something that we should all be happy to protest against right? Because no matter from which side you look at it, rape is awful.

And so I clicked on the video to see what the man was complaining about, why he was confronting these innocent women and, you just have to see it for yourself.

Okay, so in the 30-second clip, this is what the man had to say against these women protesting.

Here is the transcript of what he said:

You you girls you have a role to play in that rubbish. You’ll be collecting money from boys and you will not…“I want to zip up”, how can you? Go and search your conscience, it’s very very bad. Before you talk to any girl now, you’ll be saying you have money. Even me, at my age, I have girlfriends of your age, “Daddy how much will you give me?” Am I lying? Stop collecting money from boys. When you collect money from boys, anytime they have it again, they will deal with you.

Now, this video has since gone viral and the reaction to the video has been…mixed, to put it mildly.

For every comment that was against the man saying he was talking rubbish, there was another saying that the man made some points. Here are some examples:

This man should be ashamed himself……..So the 5yrs old girl that was raped collected money abi? Some Nigerian men are just annoyingly backwards. He needs to be educated about RAPE issues in our society.

To which in response to Oluoomo’s tweet above, he got a couple of different reactions against him including:

What the man said is 100% relative. Obviously it does not apply to every rape case but you can’t say it’s rubbish.

The man clarified it with the first word. He said “You girls, you have a role to play in that RUBBISH” That’s for you to know he knows it’s rubbish but he want we ladies to admit some faults too

See, most tweeps, rather than stating practical steps that could be adopted to avoid rape in some cases, they will be focus on carry placards. The man in his first statement just highlighted one measure that could be used to avoid some instances of rape. But woke people miss it.

to his where people are chastising the man’s comments to be met with such resistance and people being against it. Still, while a lot of the tweets were in favor of the man and saying he made a point, there were also a lot of tweets that didn’t agree with him.

This is absolute rubbish. Tell the boys to play their part by not giving money to girls if that’s their excuse for doing what they do. Imagine the rubbish he is saying mad man.

#BBNaija: Check out the wedding invitation card Fans designed for Eric and Lilo