Is she spending out of her donations already? – The outfit Erica rocked to the weekend party priced to be over N1million 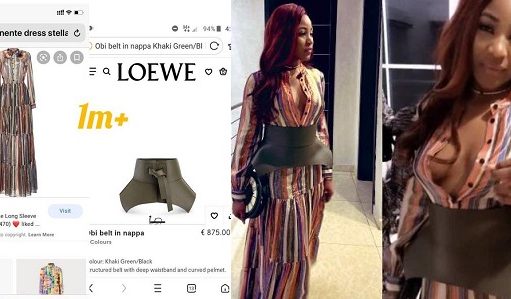 Big Brother Naija disqualified housemated has had her outfit to the weekend party priced for over N1million.

The self acclaimed “star girl”, Erica was seen over the weekend rocking designer outfit of $1470 (N570k) and £870 respectively.

This has got the expected question on many Nigerian’s lips. Has she started the  donations her fans made to her “GoFundMe” account

Meanwhile, the weekend party is said to be Erica’s first public appearance and she undoubtedly stepped out in style.

KiddRica, as they are fondly called, couldn’t get their hands off each other throughout their stay at the party.

In other news, loverboy Kiddwaya has expressed his displeasure at people tagging his love interest in the house, Erica a gold digger.

Kidd stated that Erica should not be referred to as a gold-digger, adding that the actress is an independent lady that is doing well for herself.

The lovely moment Instagram Comedian, Taaooma’s boyfriend proposed to her…