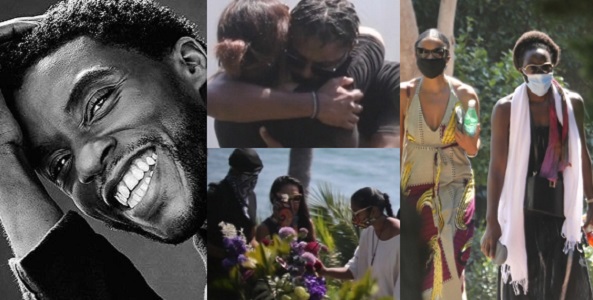 Michael B Jordan and his Black Panther co-stars joined Chadwick Boseman’s family and friends for his Malibu memorial.

Mourners including Michael B Jordan, Lupita Nyong’o, Winston Duke, and other Black Panther stars joined the star’s grieving wife Taylor Simone Ledward at his private memorial which took place a week after his death.

Boseman was also remembered on Thursday, September, 3, as a ‘hometown hero who brought a sense of pride’ to his native Anderson, South Carolina.

The city paid tribute to Boseman in a public memorial with a viewing of Black Panther held at an outdoor amphitheater with kids – dressed up in Black Panther costumes.

Boseman died on Friday after a four year battle with colon cancer.

A statement posted on the actor’s Instagram account said the actor had been diagnosed with Stage III colon cancer in 2016, which had progressed to Stage IV. According to the statement, he died in his home, with his wife and family by his side.

“It is with immeasurable grief that we confirm the passing of Chadwick Boseman,” the statement said.

Chadwick Aaron Boseman was an American actor and producer. He was famous for his role as ‘King of Wakanda’ in the ‘Black Panther Movie’, he’s also known for his portrayals of real-life historical figures, such as Jackie Robinson in 42, James Brown in Get on Up and Thurgood