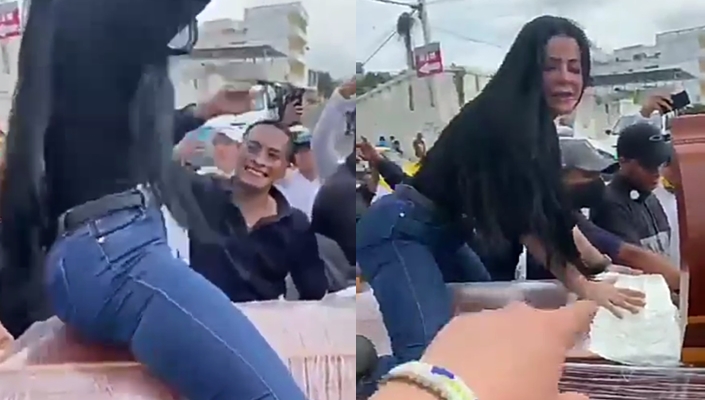 According to the reports, a strange thing happened during a funeral ceremony in Ecuador when a lady jumped on top of a half-open coffin and started twerking.

Mobile phone footage taken by a spectator shows the young woman sitting astride the coffin and dancing to the reggae music.

She made several sexual moves and even leaned into the open part of the coffin to blow a kiss as she twerked.

Mourners watched this display in the middle of a road in the city of Manta, in the Province of Manabi, Ecuador, and filmed with their phones.

We see a sizeable crowd of men cheering in high spirits as the music blasts from a loudspeaker.

They shared the video on Twitter along with a caption:

“If yo girl don’t do this at yo funeral is she really yo girl.”

According to El Universo, they identified the deceased as 38-year-old Marlon Mero Quijije.

in the neighborhood of San Jose in Manta and pronounced dead at the hospital.

Prosecutors believed he was a victim of a clear robbery and was attacked when he resisted.

Diego Bolaños, Chief of Operations of the Manta District Police, explained that they found six bullet holes in the attack’s area, of which three hit Marlon.

He added that Marlon had no criminal record.

If yo girl don’t do this at yo funeral is she really yo girl? pic.twitter.com/TxbYLkm661