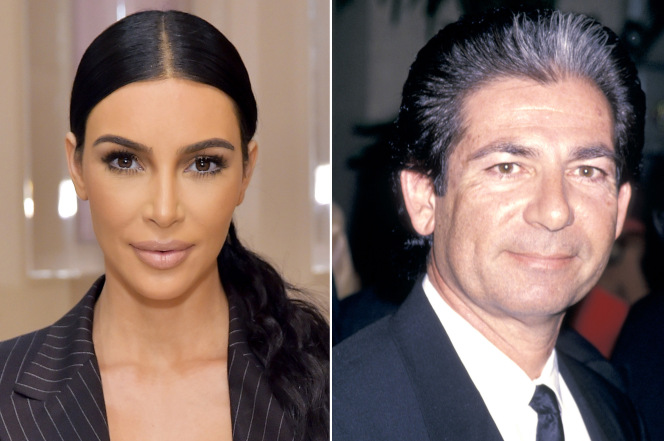 Kim Kardashian revealed that husband Kanye West surprised her with an unusual present for her 40th birthday this week: A hologram message from her deceased father, Robert Kardashian.

Kardashian announced the gift on Twitter Thursday evening, calling it “the most thoughtful gift of a lifetime” and “a special surprise from heaven.”

“It is so lifelike!” she added. “We watched it over and over, filled with emotion.”

#USDecides: Kanye West reveals this is his first time of…

See also: The moment Desmond Elliot admitted social media was instrumental to his victory in 2015 (Video)

“You’re 40 and all grown up,” Robert — who died in 2003 — tells Kim in the nearly two-and-a-half-minute clip. “You look beautiful, just like when you were a little girl. I watch over you and your sisters and brother — and the kids — every day.”

The ersatz Kardashian makes mention of driving Kim to school “in my tiny Mercedes” while listening to Barry Mann’s “Who Put the Bomp,” at which point the hologram dances and sings along.

I am so proud of the woman that you’ve become, Kimberly, and all that you’ve accomplished,” it continues. “But most impressive is your commitment to become a lawyer and carry on my legacy. It’s a long and a hard road, but it’s worth it, and I’m with you every step of the way.”

It seems likely that West, 43, wrote the script the hologram reads from, given that Kardashian says “you married the most genius man in the world” (Page Six has omitted approximately six repetitions of “most” in our transcription of that line) at one point.

“Keep doing what you’re doing, Kimberly, you are a beautiful soul. Know that I am very proud of you and I am always with you. I have built a firewall around our family. I love you … Don’t forget to say your prayers,” the hologram finishes, before dissolving into a cloud.

For my birthday, Kanye got me the most thoughtful gift of a lifetime. A special surprise from heaven. A hologram of my dad. ✨🤍 It is so lifelike! We watched it over and over, filled with emotion. pic.twitter.com/jD6pHo17KC