20k salary earners should have nothing to do with relationships…

The former Big Brother Naija housemate Terseer Waya, better known as Kiddwaya and his cousin identified as Doodoo Armani have clashed on Twitter as both were seen exchanging words.

Before the cousin of Kiddwaya called him out and dragged him to the mud, Kiddwaya made a post earlier, telling his fans not to believe any news which comes from his cousin Doodoo Armani or any other blogger because he’s a private person and doesn’t make his issues public.

It appears the tweet of Kiddwaya didn’t go down well with Doodoo Armani. She also fired back at Kiddwaya in series of tweets and also warned him never to tag her in any “stupid” post. She further described Kiddwaya as an ingrate. 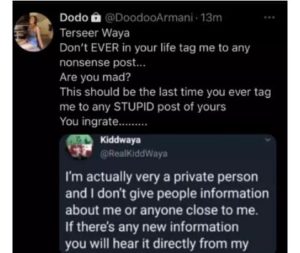 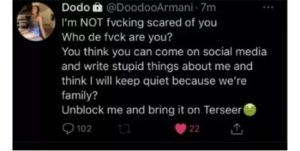 Highly endowed model, Sanchi and mother cause stir on social media as they rock…

3 Weeks After She Was Assaulted, See How Lil Frosh’s Ex-Girlfriend Looks Now (Photos)

I’m so glad I made my sweet Mama laugh – Iyabo…

Highly endowed model, Sanchi and mother cause stir on social…

Bobrisky shows off N15million cash gift he claims to have…