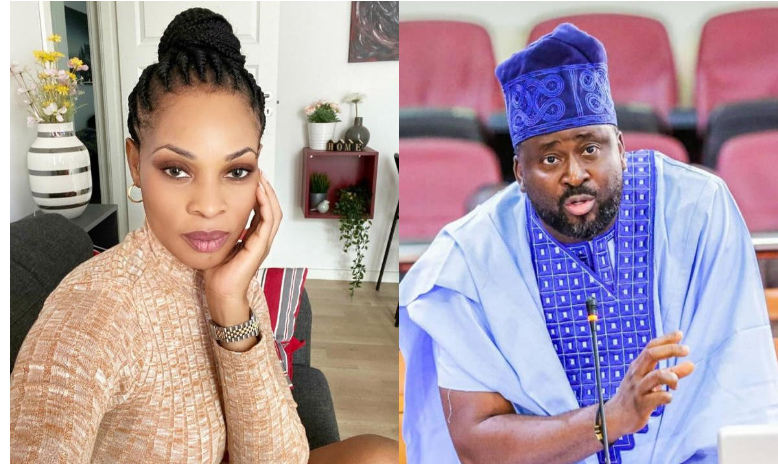 This comes after he made some not so good comment during the Lagos plenary session against the youth.

The Info NG recalls that Desmond Elliot branded the Nigerian youth “Children” during his submission and called out Nigerian celebrities for fueling hate on social media.

Celebrities console Osas Ighodaro over the death of her…

This earned him a lot of backlash from Nigerians and celebrities alike.

Georgina Onuoha accused Demond Elliot of practically advocating for the censorship and control of social media which is the only means for Nigerian youths to air their grievances regarding a nation that has failed them, and also calling for governorment regulations that will subjugate the people’s will from expressing themselves in a democracy.

Describing the lawmaker as “Dishonorable”, she also queried him on what he has done for his constituents and also asked residents of the constituency to outline what Desmond has done that is visible for all to see.

I’ve gotten a lot of calls and text messages regarding Desmond Elliots posts I made and rightfully so.
It will be morally wrong and reprehensible not to call him out because of the“ Na we we” or he is one of us mentality.
The change we seek must begin with us.
Desmond owes all of his entertainment colleagues an apology for personally calling them out as instigators of his purported “ looting and violence simply because they raised their voices to condemn police brutality and injustices happening in our society.
Desmond was practically advocating for the censorship and control of social media which is the only means for Nigerian youths to err their grievances regarding a nation that has failed them. Desmond was calling for governorment regulations that will subjugate the people’s will from expressing themselves in a democracy.

That is dangerous and he should be held accountable for his gross mischaracterization of the Nigerian youths and Nigerians as a whole.
Lastly, just like Desmond I condemn the looting of innocent people’s livelihood. It is not who we are and that doesn’t represent the peaceful protest the globe watched until his god father’s disrupted this peaceful protest by sending in their thugs and arsonists.
I also want to ask dishonorable Desmond @desmondelliot , since representing Surulere what have you done for your constituents?
Build a latrine? A wood bridge and laughable makeshift hand washing stands???

It is a disgrace..
How much was commissioned for those projects???
If you live in Surulere, please outline what Desmond has done that is visible to see and has impacted your life positively??
It is within your rights to start asking him and others that represents you to show you what they’ve done for you.
It is time for accountability. This is how change will begin.
Accountability and representations.
@desmondelliot what have you done to impact the lives of the constituents you are crying for on national television??
Please outline them all.