Ire, I’m your mother – Toyin Abraham to her son after he ignored her while walking with his dad (video) 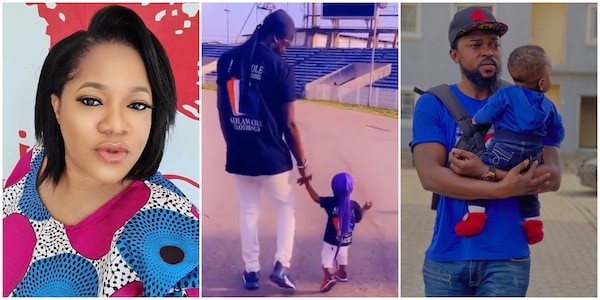 Nollywood actress, Toyin Abraham was spotted spending time with her family in a video shared by her husband, Kola Ajeyemi on IG as they step out with their son, Ireoluwa.

In the video, Kolawole held his one-year-old son Ire’s hands. His grown-up daughter was also spotted as they took a stroll.

It seemed Toyin was the one behind the camera as she was not seen in the video but her voice was heard.

‘When we were doing hide and seek’ – Toyin…

As the father and son walked ahead, the actress called out to her adorable son and he ignored her. She kept calling out to him but he would not answer.

Even when she reminded him that she is his mother, Ire continued to walk with his father who burst into laughter as soon as he heard his wife trying to guilt-trip their son.

Watch the cute video below: