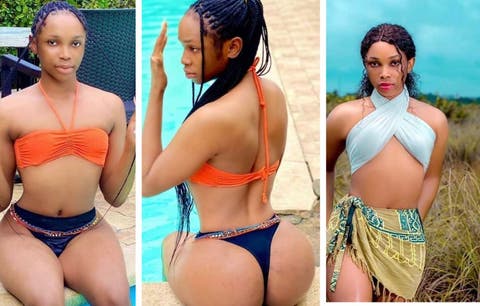 It looks like Nigerian crossdressers are out to compete this week as Daniel Anthony popularly known as Jay boogie, is the latest to shares photos online.

The Port Harcourt influencer posed in a two-piece swimwear while sitting on the edge of a swimming pool.

“A Queen is a woman who carries herself in an enviable charisma, a woman who’s endowed with a willingness to ignore fools, a Queen would never go around feeling and showing her reign is threatened, too lame such an act for a queen, cause she knows her place, I mean a Queen wears a crown, not a tiara!

I had no intention to be a threat to anyone’s path, and I was never born to scare any shaft who feels her stove throne is about to be snatched into obvious damnation, give it time, You might be a queen in your kingdom, but don’t forget we’re all queens in our different castles.

Life is a journey sweetheart, not a competition and two wrongs don’t make a right, take your parents for example just like you, it’s a case of Enjoy it while it last and with that I bid you goodluck, impress me more with the foolery. Arrogance and stupidity all in one package, how efficient of you.”

Man advises guys to take a look at the nature of the lady’s family before marriage, gives reason