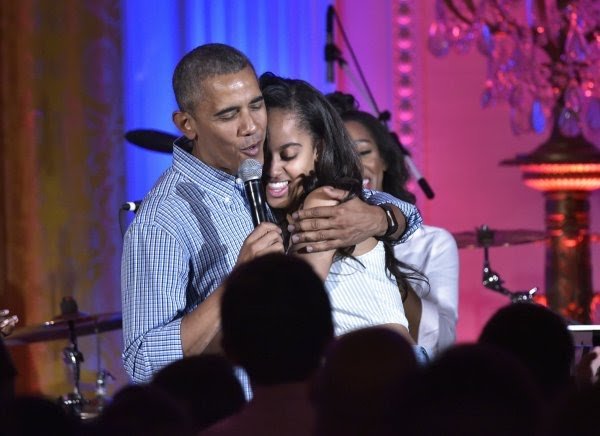 Barack Obama reveals some behind the scenes glimpses of his life in the White House in his forthcoming memoir, including problems in his marriage and how the stress of the job increased his smoking habit.

The 768-page tome, entitled ‘A Promised Land’ and out on November 17, focuses on Obama’s early political career through is first term in the White House. But the book also features some human interest stories, including the former president’s struggle to quit smoking.

Obama admits that he would sometimes smoke eight or nine or ten cigarettes a day and look for a ‘discreet location to grab an evening smoke,’ in the memoir, a copy of which was obtained by CNN.

6 Important Things Obama Said About Courage As He Received…

And he credits his eldest daughter Malia with getting him to quit, writing she ‘frowned’ at him after ‘smelling a cigarette on my breath.’

He said he ‘ceaselessly’ chewed nicotine gum to stop.

During his presidency there was endless speculation on whether or not Obama had kicked the habit, which he famously promised his wife Michelle he would do before he campaigned for president.

Obama began smoking as a teenager and talked about his struggle to quit.

He was never caught on camera smoking during his White House tenure, but there were hints of his habit.

In 2015, during Obama’s trip to Germany for a G-7 meeting, a spokesman for the then-Italian prime minister Matteo Renzi posted a photo online that appeared to show Obama holding a pack of cigarettes.

The White House, at the time, said it was not.

During the debt crisis in August 2011, Obama was photographed in the Oval Office with what appeared to be Nicorette gum on his desk.

In his memoir, Obama also writes about how life in the White House took a toll on his marriage.

Malia Obama was 10 and Sasha Obama was seven when their father became president. He and Michelle had been married 16 years when they became the first couple.

Obama hints at frustrations felt by his wife in the fishbowl life of the White House.

The book is the first of two parts coming from the former president – part of a $65 million deal he and Michelle Obama signed with Penguin Random House. The former first lady’s book ‘Becoming’ sold millions of copies when it came out in 2018, setting a high bar of expectations for her husband’s book.

In her memoir, Michelle Obama also discussed martial problems, revealing the couple went to marriage counseling in Chicago before their White House tenure, early in their marriage when Obama was in the state legislature.

While she was promoting her book, Michelle Obama told ABC News: ‘I know too many young couples who struggle and think somehow, there’s something wrong with them.’

In his book, Barack Obama also speaks to race relations in the United States, writing it was his own historic election as the nation’s first black president that sparked some of the current division in the country.

‘It was as if my very presence in the White House had triggered a deep-seated panic, a sense that the natural order had been disrupted,’ Obama writes in the book, which was obtained by CNN.

Donald Trump, he claims, sensed the country’s mood and took advantage of it to win the White House in the 2016 election.

‘Which is exactly what Donald Trump understood when he started peddling assertions that I had not been born in the United States and was thus an illegitimate president. For millions of Americans spooked by a Black man in the White House, he promised an elixir for their racial anxiety,’ he writes.