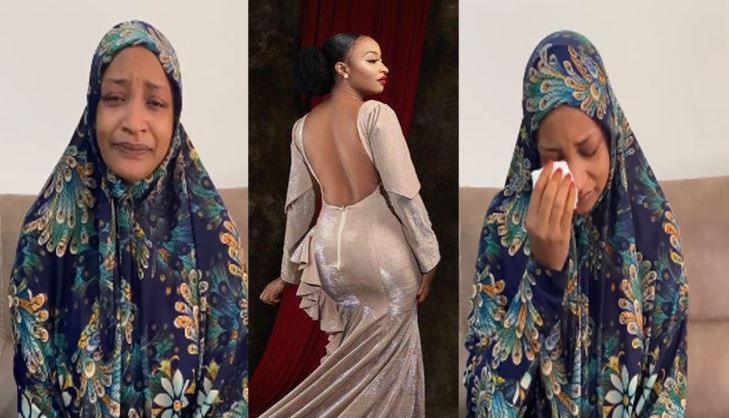 Nigerian actress, Rahama Sadau has apologized to Nigerians especially the ‘Arewa Twitter community” for posting photos bearing her back.

Rahama broke into tears while begging Arewa youth for forgiveness following the attacks she was faced with over her post. She went ahead to take down the controversial photo and posted a video of herself wearing a full hijab in total remorse and contrition.

READ ALSO: Being banned by Kannywood has opened a lot of doors for me – Rahama Sadau

In a post translated from the Hausa Language, she wrote:

Salam Alaikum Jama’a. I made this video out of remorse and frustration. I also apologize for what happened to all Hausas, my colleagues and Muslims in general for this picture of mine that caused this controversy.

This is not my nature as a Muslim. I am a lover of the Prophet (pbuh), and I fight anyone who touches him or touches my religion. It was a fate that brought someone to insult me ​​over my picture. I AM NOT WITH HIM, AND GOD CURSES HIM ON THIS DISGUSTING AND CONFLICT BECAME WHEN THE WORLD WAS IN A SITUATION. It will not happen to me again, God willing.

Thank God for protecting our faith and our religion.

#USDecides: Kanye West reveals this is his first time of voting