Controversial Nigerian prophet, Goodheart Aloysius, has said that giving 10 Naira as offering in this harsh economy is wickedness. This is coming after he made the viral comments of a church member having three cars while is member treks

“OGA YOU HAVE 3 CARS AND YOUR PASTOR IS TRECKING WITHOUT A CAR AND YOU ARE VERY COMFORTABLE
DON’T WORRY YOUR DAYS ARE NUMBERED.” He wrote.

He has now taken to Facebook to cry out about offering.

“IN THIS HARSH ECONOMY, GIVING TEN NAIRA AS AN OFFRIENG IS WICKEDNESS BEFORE GOD.“ 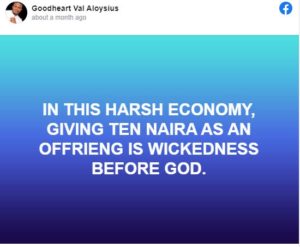 Meanwhile, Pastor Chris Oyakhilome has said that US President, Donald Trump, is hated by many because he supports and protects Christians. The popular clergyman made this known while speaking in his church on Friday, November 6.

Trump has since alleged that the electoral process was rigged and has vowed to challenge the process in court.

Unemployment made me start dressing and acting like a woman – James Brown says, reveals how much he earns now