Nigerian singer, Stanley Omah Didia, better known as Omah Lay alongside female act, Temilade Openiyi, popularly known as Tems have been in the Ugandan police custody for more than 24hrs.

The  Bad Influence crooner has taken to social media on Monday afternoon to revealed he is un cuffs.

“I’m in cuffs in Uganda right now with Tems”

“Only a GOAT recognises another” – Tems boasts…

Snoop Dogg reaches out to Tems for collaboration (Video)

On Sunday, December 13, 2020, a report went viral on social media that Omah Lay had been arrested in Kampala Uganda.

The news was broken by Ugandan journalist, Canary Mugume.

Omah Lay and Tems were billed to perform at The Big Brunch, at Speke Resort, Wavamunno Rd, Kampala, Uganda on Saturday. 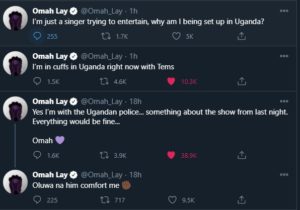