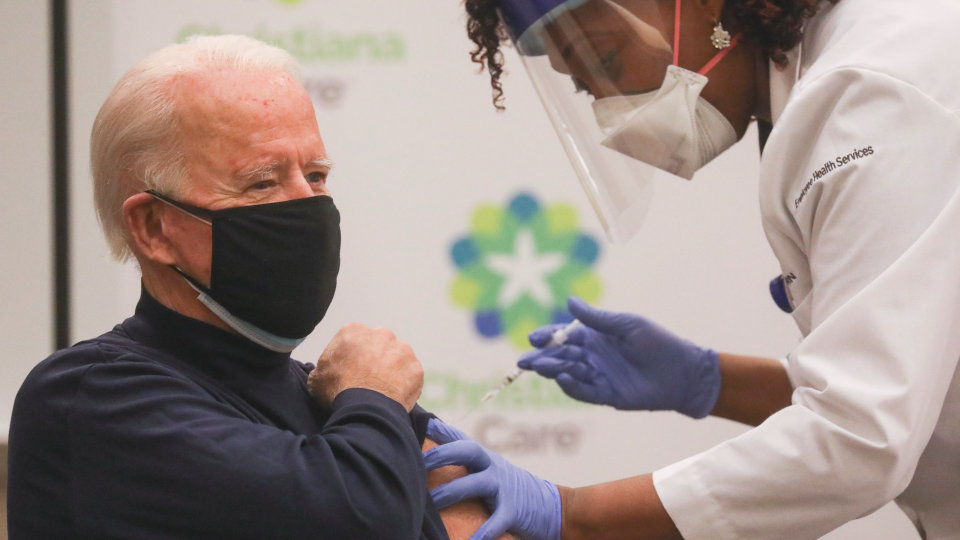 President-elect Joe Biden received his first dose of the Pfizer and BioNTech coronavirus vaccine on live television Monday afternoon and reassured Americans of the vaccine’s safety.

The shot, which Biden received in his left arm , was administered at ChristianaCare’s Christiana Hospital in Newark, Delaware, by Tabe Mase, who is a nurse practitioner and the head of employee health services at the hospital, according to the Biden transition team.

“We owe these folks an awful lot,” Biden said, thanking those involved in the vaccine’s development and distribution and front-line health care workers.

60-year-old woman believed to have died from Covid throws…

“I also think that it’s worth saying that this is, is great hope. I’m doing this to demonstrate that people should be prepared, when it’s available, to take the vaccine. There’s nothing to worry about. I’m looking forward to the second shot; so is Jill,” Biden said.

“She’s had her shot earlier today. She loves shots, I know,” he said, taking his wife’s hand as she laughed.

Biden noted that the vaccine rollout was in beginning stages and cautioned Americans about the long road ahead.

The President-elect urged Americans in the meantime to listen to public health experts and wear masks and socially distance and to not travel unless absolutely necessary during the holiday season.

“Because we’re still in the thick of this,” Biden continued. “It’s one thing to have the vaccine show up at a hospital, it’s another thing to get the vaccine from that vial into a needle, into an arm.”

Biden’s vaccination came one week after the first doses of the vaccine were injected into health care workers, and days after the US Food and Drug Administration granted emergency use authorization for a second coronavirus vaccine.

Incoming first lady Jill Biden received the first dose of the Pfizer vaccine just prior to the President-elect on Monday at the same hospital, and it was administered by the same nurse practitioner, according to Biden spokesman Michael LaRosa.

The Pfizer vaccine requires two doses administered several weeks apart in order to reach 95% efficacy. The transition team has not provided details about when the Bidens will receive the second dose.

The nation’s top infectious disease specialist, Dr. Anthony Fauci, told ABC last week that he would strongly recommend that Biden and Harris get vaccinated as soon as possible. He also recommended that President Donald Trump and Vice President Mike Pence receive the vaccination.

Biden told CNN’s Jake Tapper earlier this month that he would get the vaccine as soon as Fauci told him it was safe, and that he would do it in public to demonstrate his confidence in it.

Psaki told reporters that Biden and Harris were staggering the vaccine at the recommendation of medical experts. The reason could be that if Biden and Harris experience the reported side effects, such as a headache or fever, they would not have them on the same day.

Pence, second lady Karen Pence and Surgeon General Jerome Adams were administered the vaccine at an on-camera event last week. The Trump administration has said having the vice president receive the vaccine in public was part of the government’s efforts to build confidence among the public in the vaccine’s safety and efficacy.

Trump has not received the vaccine yet and won’t be administered one until it is recommended by the White House medical team, a White House official told CNN last week. The President is still receiving the benefits of the monoclonal antibody cocktail he was given after he tested positive for Covid-19 this fall, the official said, but he is likely to get his shot once it is recommended by the medical team.

Part of Biden’s plan to combat the pandemic includes distributing 100 million vaccine shots, enough to cover 50 million people, in his initial 100 days in office. The coronavirus pandemic had killed more than 318,000 Americans as of Monday afternoon.

Peter Okoye now a co-owner of a wine company (Video)