Watch as Davido shows off his cooking skills as he joins his sister, Sharon on her show (video) 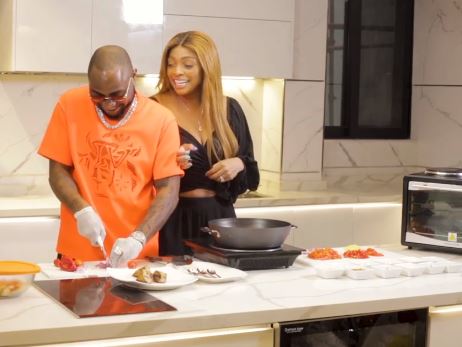 Nigerian singer and DMW label owner Davido has shown off his cooking prowess as he joins his sister, Sharon on her show.

The music star appeared as a guest on his sister’s cooking show, Diary of An Inner Fat Girl, where he revealed that he made the delicious meal using his late mum’s special recipe.

He added that when his sister gave him the heads up that he would be coming to the show, the only recipe that came to his mind was one that his late mom used to prepare.

See also: RMD recounts how Nengi was shy but brought so much warmth in the ‘Jowo’ video shoot

Sharing the video on Instagram, Sharon who was obviously excited, expressed her gratitude to God for giving her the opportunity to do what she loves and also thanked her brother for joining her even though he had a busy schedule.

“I’M SO GRATEFUL TO GOD THAT I GET TO DO WHAT I LOVE AND I GET TO SHARE THESE MOMENTS WITH THE PEOPLE I LOVE. MY BROTHER @DAVIDO TOOK TIME OUT OF HIS SCHEDULE TO JOIN ME ON THE NEW EPISODE OF DIARY OF AN INNER FAT GIRL”.