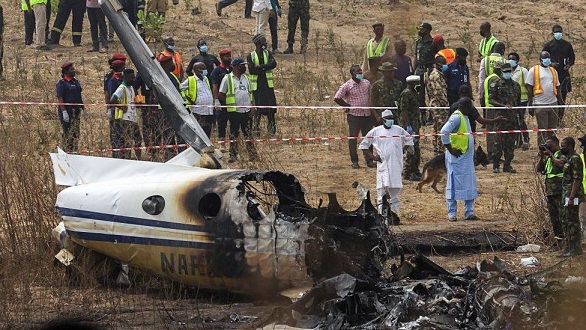 Residents have opened up folkowing the fatal plane crash that took many lives on Sunday, February 21 2021 in the Federal Capital Territory.

Recall that the fatal plane crash that occurred at Nassau Village in the Federal Capital Territory, Abuja, on Sunday afternoon involving the jet belonging to the Nigerian Air Force.

It was gathered that the plan was on its way to Minna to rescue 27 students and 15 staff of Government Science College, Kagara, who were kidnapped on Wednesday, when it crash landed in Nassau Village around 11am.

One of the residents, who witnessed the accident, Ebube Onyedi, told PUNCH that they initially took the loud sound that characterised the crash for a bomb blast

“The accident happened around some minutes to 11am this (Sunday) morning and it caused confusion in Nassau, which as you can see is one of the communities bordering the Abuja airport.

“Many of us ran out of our houses when we heard the explosion. It really caused so much panic, as initially, people thought it was a bomb blast,” he struggled to say while still catching his breath.

Another resident, who simply identified himself as Gboyega, said he saw the aircraft struggling to land but it eventually crashed and burst into flames.

Gboyega applauded the pilot of the aircraft, as he stated that the pilot averted what would have turned out to be “a greater casualty figure.”

He said, “The pilot tried not to crash the plane on buildings because it was almost falling on some structures before it eventually dropped where there was no building.

“It burst into flames after crashing and people in their respective homes around the area ran out in fear.

“If not for the pilot’s efforts, we would have seen a greater casualty figure.”

Another resident of the area, Sunkonmi Toyheeb, said he was working in a building in the community when the aircraft crashed.

“We were among the first set of people who rushed to the accident scene because I was working in a building close to the areas where the aircraft fell.

“The fire service men tried, well may be because this place is close to the airport. But before they could put out the fire, the people inside the plane have been burnt beyond recognition.”

Another eyewitness, Ruth Nnaemeka said, “I saw the plane before it crashed. At first, it hovered as if it wanted to land and before you know what was happening, it moved up again into the sky.

“It then kept swinging from one side to the other. In fact, the sight was terrible. It tried moving towards the airport where other airplanes use to land.

“From afar, I saw it going down and at a point it disappeared and the next thing that followed was a bang which led to the eruption of fire and thick smoke.

“And I was like, ‘Oh God, these are humans burning in this fire.’ The situation got me scared and worried and I couldn’t eat after seeing what happened to that plane this morning.

“Fire service men and ambulances rushed down as early as they could because this place is close to the airport, but they could not save the passengers from being burnt because the explosion was huge.”

Officials of the Ministry of Aviation said the NAF jet crashed after it had reported an engine failure at about 10.39am.

They said firefighters from the Federal Airports Authority of Nigeria and the National Emergency Management Agency were among first responders to the crash site.

“A Nigerian Air Force NAF201 B350 aircraft departed Abuja at 1033UTC with six persons on board including two crew,” the Director, Public Affairs, FMA, James Oduadu, stated in a brief update about the accident.

He added, “Aircraft reported engine failure at time 1039 and crash landed on the final approach path of Abuja Runway 22 at time 1048UTC.

“Fire services are already at the scene of the accident. All six persons on board reported dead.”