“An extra baby added to my garage” Actress, Destiny Etiko says as she shows off her newest whip (Photo) 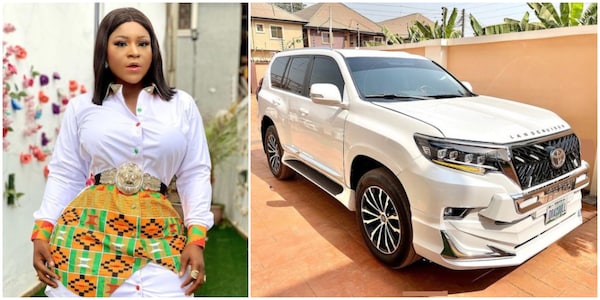 Nollywood actress, Destiny Etiko has added a new whip to her cars collection.

This comes after the actress reveal she is now a proud owner of a new Toyota Land Cruiser Prado via her Instagram account as she showed off the new car.

“An extra baby added to my garage,” the actress wrote as she showed off her newest car.

“When a woman acquires a car, Jobless fools tag it…

Destiny Etiko (born 12 August 1989) is a Nigerian actress who won the City People Movie Award for most Promising Actress (English) at the City People Entertainment Awards in 2016.

Etiko described in an interview with Vanguard, that after registering with the Actors Guild of Nigeria she ventured into the Nigerian movie industry in 2011 and described her experience then as a difficult one because she had to combine her acting career with her school recruitments as she was still a student at the time.