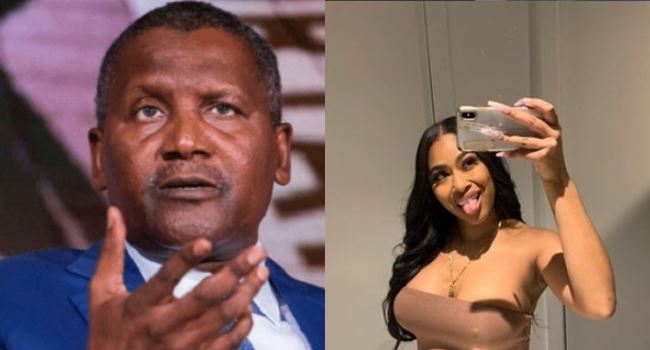 According to reports, the girlfriend of Aliko Dangote, Africa’s richest man, Autumn Spikes got evicted from her North Miami apartment in Florida, U.S., after piling up unpaid rent for six months in 2020.

In the court document obtained by Premium Times, Ms Spikes was grappling with accumulated rent arrears of $13,230 for the months of March to August 2020.

The landlord of the property, The Shoreline at SoleMia, 2301 Laguna Circle, North Miami, Florida, issued Ms Spikes with a 30-day ‘Pay or Vacate’ notice on August 5.

Ms Spikes neither paid the debt nor vacated her apartment number 1708.

After the expiration of the 30-day notice, the landlord, on September 19, 2020, filed an eviction suit against her at a Miami Dade County court, in Florida,  the same court where Mr Dangote would later sue her in January.

PREMIUM TIMES on Thursday obtained the complaint, notice of debt, the lease and other documents filed as exhibits by Ms Spikes’ landlord in the suit that is now closed.

The landlord’s complaint in the eviction suit reads in part, “Plaintiff owns or is the lessor of the real property, the premises:

“Tenant retains possession of the premises under a written lease requiring rent of $2,215.00 per month to be paid the first of each month.

“A copy of relevant portions of the lease is attached hereto and incorporated herein as plaintiff’s Exhibit A.

“Tenant failed to pay rent for March, April, May, June, July and August.

“Tenant owes plaintiff rent the months stated in paragraph 6 herein in the total sum of $13,230.00

“Plaintiff served tenant notice to pay or vacate the premises on August 5, 2020 as shown by copy or copies of the notice(s) attached here to and incorporated herein as plaintiff’s Exhibit (s) B, but tenant refuses to do either.

“In accordance with Fla. Stat. (Florida Statutes) Section 83.60(2), if tenant fails to deposit the sum of $13,230.00 in the court registry, plus rent which accrued during the pendency of this action, then plaintiff is entitled to a default judgment for removal of tenant and to recover a judgment for rent due and owing costs in accordance with Fla. Stat. Sections 83.59 and 83.625.

“Failure of tenant to pay rent as due caused plaintiff to retain undersigned counsel and incur reasonable attorney’s fees and costs, which tenant should pay pursuant to Flat. Stat. Sec 83.48 and the lease.

“Wherefore, plaintiff demands judgment for possession of the premises, rent, due, court costs and attorney’s fees against the defendant and other available remedies in accordance with Fla. Stat. Section 83.625 and for such other relief this court deems just and proper.”