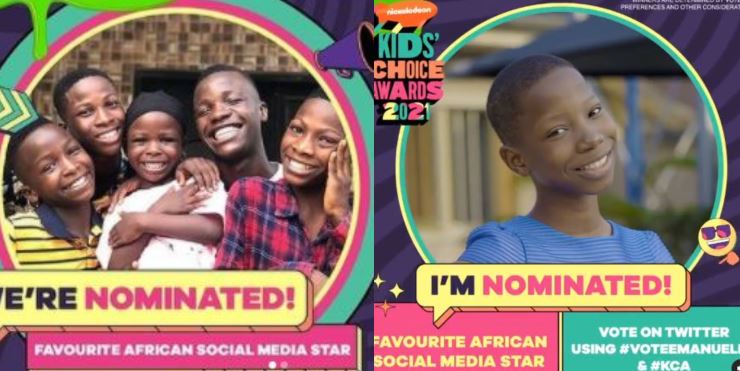 It is all shades of joy for Nigerian child comedian, Emanuella Samuel as she has just been nominated for the 2021 Nickelodeon Kids’ Choice Awards.

The nomination list for the Nickelodeon’s Kids’ Choice Awards was released on its official website recently and Emmanuella made it to the list under the favorite African social media star category.

Sharing the announcement on Instagram, Emmanuella wrote, “Yes! I’ve been nominated for a Nickelodeon Kids’ Choice Award. Please vote for me,” while sharing how fans can vote for her.

READ ALSO: After building a house for her parents, Kid Comedienne, Emanuella buys brand new Lexus SUV for herself (PHOTOS)

Emmanuella is not the only Nigerian kid who made it to the list. Nigerian internet sensation Ikorodu Bois were also nominated for the Nickelodeon Kids Choice Awards 2021 under the favourite African social media star category.

The young boys, who are known for recreating and mimicking multi-million-dollar music videos, Hollywood film trailers and epic pictures, also announced their nomination on Twitter: “Good news! We have just been nominated for a Nickelodeon Kids’ Choice Award.”

“You Already Have Jet, So I’m Not Giving You Shishi” – Usher Reveals What A Member Put In The Offering Envelope