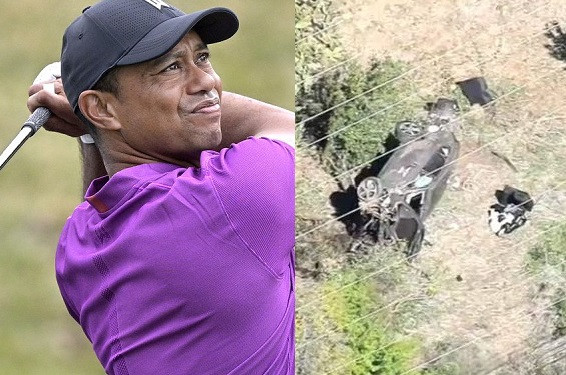 Golf legend, Tiger Woods has been hospitalized after  a single-vehicle car accident in Los Angeles on Tuesday morning, February 23,  according to the Los Angeles County Sheriff’s Department.

“He is currently in surgery and we thank you for your privacy and support,” Steinberg said.

The L.A. County Sheriff’s Department said at around 7:12 a.m. PT, police responded to a single-vehicle rollover crash on the border of Rolling Hills Estates and Rancho Palos Verdes. The vehicle, which Woods was driving alone, sustained major damage.

This morning @LMTLASD responded to a roll-over collision in which @TigerWoods was injured. Please see our statement… pic.twitter.com/cSWOxKZC1w

According to the Los Angeles Times, Woods was traveling at a high rate of speed and lost control of the vehicle before crossing the center divider. Woods’s SUV rolled multiple times before coming to a halt.

The L.A County Sheriff’s Department statement also said Woods was “extricated from the wreck with the ‘jaws of life’ by Los Angeles County firefighters and paramedics.”

He was subsequently transported to Harbor-UCLA Medical Center by ambulance.

According to Golf Digest, Woods, 45, was in California for a two-day content shoot with Golf Digest/GOLFTV after serving as a host for the PGA Tour’s Genesis Invitational over the weekend. He was spotted alongside former NBA star Dwyane Wade and actor David Spade at Rolling Hills Country Club on Monday February 22

The accident comes weeks two months after Woods underwent the fifth back surgery of his career. The microdiscectomy procedure he had this past December was the same procedure three previous times, once in 2014 and twice in 2015.

Banky W shares videos from song he recorded when Adesua was 6 months pregnant, reveals meaning of their baby’s name