Former Big Brother Naija housemate, Tboss has lashed out at men who collect or destroy the gifts they bought for their girlfriend after they breakup.

See also: Man demolishes house he built for girlfriend after a breakup (Video)

According to Tboss, men who always collect and destroy the items they gifted their girlfriends after a breakup are “classless and childish”.

The former reality star made this known via her Instagram stories as she questioned the upbringing of such men while wondering if such men received home training. 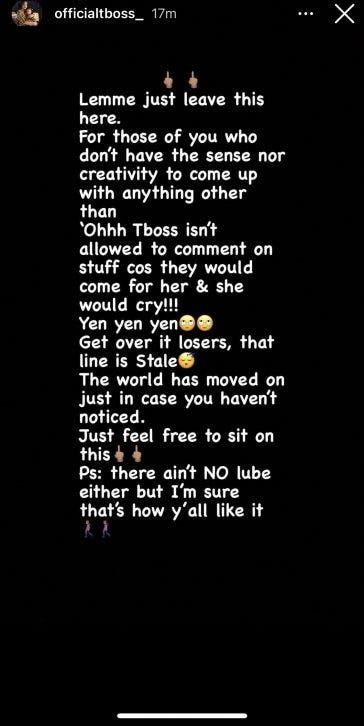 Also, the reality star blasted people who are insulted her for commenting on a topic they claimed isn’t her business.

See also: Know the difference between a ‘bus lady’ and a ‘boss lady’ – TBoss slams Ka3na over tattoo drama

Popular Blogger, Chinnysblog narrates how she battled and managed to survive Intestinal obstruction