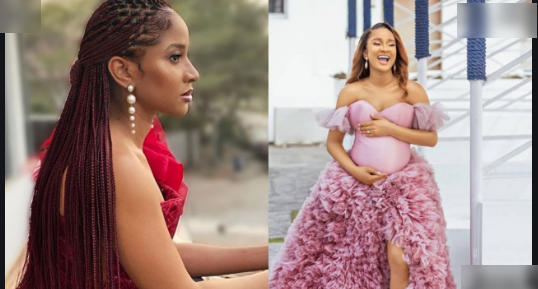 Nollywood actress, Adesua Etomi has reacted to allegations that her baby bump was fake.

This comes after the new mum shared lovely photos of when she was still pregnant with her son, Zaiah.

According to a follower,  some blogs and trolls on social media speculated that the baby bump was fake and that Adesua adopted the baby. The follower added that it is unfair to think like that and it’s a big shame to those people.

”Stupid blogs saying the pregnancy was fake, women turning against other women for no reason all the way down to something as serious as pregnancy, SHAME!!!”

“Bold of them to assume Susu actually cares so much about people’s opinions to the extent of pushing herself to pull a fake pregnancy stunt, people are so vile and hateful”

‘I Miss Her So Much’ – Actress, Ada Ameh Reveals How Her Late Daughter Changed Her Life