A Facebook user identified as Augustine Imoniche Oviosun has expressed his excitement and elation as he looks forward to walking down the aisle with his soon-to-be bride.

The young man who could no longer hide his enthusiasm took to social media to make a very funny assertion that has subsequently caught people’s attention.

He stated that after tomorrow, that he will be permitted to do ‘that thing’ every day, this statement of his is what has attracted much attention. He posted this alongside a pre-wedding photo.

“So you mean after tomorrow I can be doing that thing everyday.

Lol . Don’t get it twisted. I mean doing assignments for my kids. Its happening tomorrow.

Official zinus21 wedding. Be my guest.” 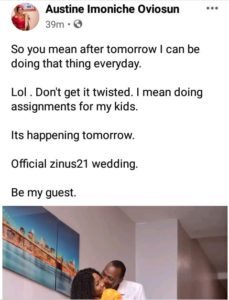