Oyorokotor is the same fishing settlement where the huge ‘Blue Marlin’ fish was caught earlier this month.

Photos of the ‘shark’ was shared by the University of Port Harcourt graduate, Zion Godwin, who went viral after he posted photos of the ‘Blue Marlin’ 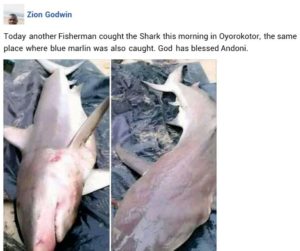 Meanwhile, A suspected female child kidnapper has been burnt to death in Lagos state. The sad story was shared by an eyewitness who wrote: