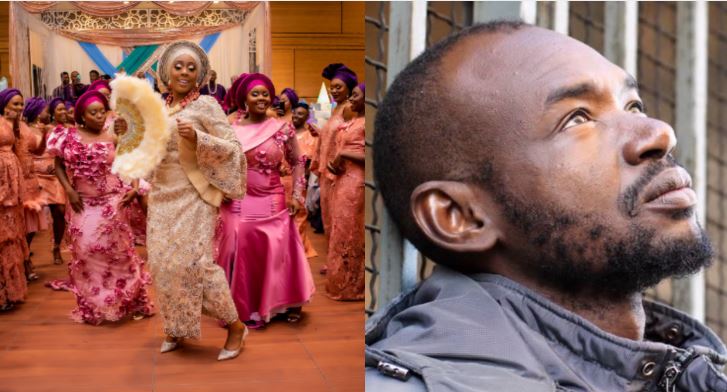 A Nigerian man has found himself in some deep waters of trouble after allegedly borrowing huge sums of money to throw an extravagant wedding ceremony.

A social media user identified as @irunmoleweil on Twitter has taken to the platform to share an ordeal of his friend who borrowed the sum of N300,000 from his office and N500,000 at a loan shack just to have a ‘loud’ wedding ceremony because his mother-in-law had said her daughter has been predestined to have major events in her life loud.

According to the narrator, the groom had expected a lot of cash gift from friends and family but to his biggest shock, only gifts and home appliances were given to them, and not one person gifted them cash sum

So this guy wanted to wed He took loan from his office 300k They will be deducting 50k monthly from his salary. Then took 500k from micro finance He’s to be paying 50k monthly for 12 months Wedding is done but the debt is there. Do you know his intended repayment plan?

He said he was hoping the people he invited would gift him very well but to his surprise most of the gifts where gas cylinders, plates, spoons, turning stick etc. in his words ‘Baba I think to say people go give me money but Na gas cylinder, plate and all those things Dem …

Him: and we use am settle MC and band and I still Dey owe Dem 20k

Me: where all the money wey you loan come enter

He rented a shop for his wife before wedding 1/6 months, she sells provisions.

Now the shop is empty and no money to restock because they’ve used most of The money to repay one debt or the other and also feed.

How do you do that to yourself?

Do you know this guys salary?

Na that one burst my eyeglass

‘As you know say your pocket no strong, why you Dey do lavish wedding’

‘As you know say your pocket no strong, why you Dey do lavish wedding’

(When I gave birth to your wife they told us she is a noisy child, so everything we do must be with fun fare and loudness)

Me: so when Una born nko

Him: Na why she never get belle ooh…she Dey on pills

Him: Ehn now….make we settle this one first

*so when you settle this one, you will enter another one AGAIN!!!* 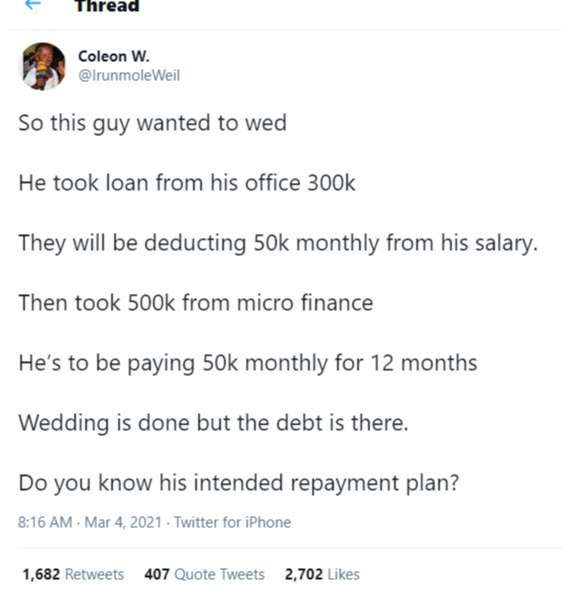 See reactions from Nigerians below