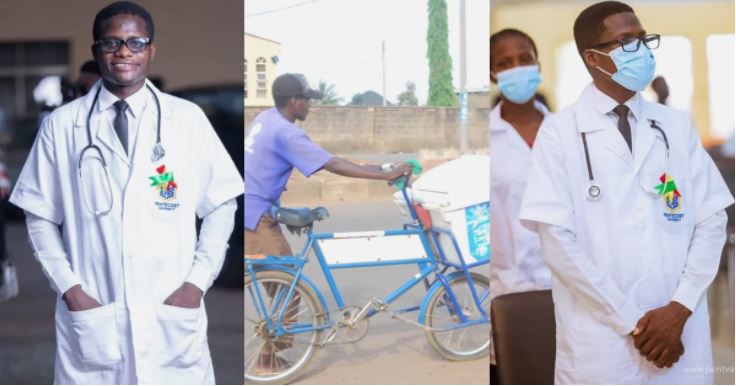 A young Ghanaian man named Adom-Ba Lucky has made it into Pentecost University in Accra after years of struggling to afford even a high school education.

The story of Adom is one that has sparked the light in as many readers that have come across it on the internet as it is believed that his father abandoned him and vowed never to sponsor his education because his mother did not get rid of him when she got pregnant.

After Junior High School, the young man had to spend four years selling on the street and doing other menial jobs to save money for Senior High School.

​The Ghanaian gentleman who spent years of consistent hustling across Ghana, just to save money for his education, has now finally made it to university.

In a report by Abandaily.com, it is indicated that Adom-Ba was able to finish BECE in 2012 but had been unable to continue education until 2016 for lack of money.

The young man came from a home where his father decided not to take responsibility for him because he asked the mother to abort him when she was pregnant but she refused.

Man who used to sell yoghurt on street makes it to Pentecost University in Accra Credit: Abandaily.com

After his BECE, Adom-Ba went to his mother in 2013 at Sogakope where he engaged in hawking by selling bread along the Accra-Lome highway inside Sogakope, particularly the toll booth.

This did not earn him sufficient income and so he joined Fanmilk Ltd Sogakope branch, where he made fruitful savings from town folks who patronised his ice cream and meat pie products on daily basis.

Throughout this period, Lucky was still not able to get enough money to further his education.

He took on acting roles with the SN Production Crew and worked as a pantry boy in an Indian restaurant to gather sufficient revenue to further his high school education in September 2016.

After all his struggles, Adom-Ba Lucky is currently a Bachelor of Science in Nursing student at Pentecost University, PU, in Sowutuom, Accra, under a scholarship by the Church of Pentecost, Tema Area.

Even If The Queen Kneel Down To Greet Meghan Daily, She’d Still Found A Way To Accuse Them – Reno Omokri Says