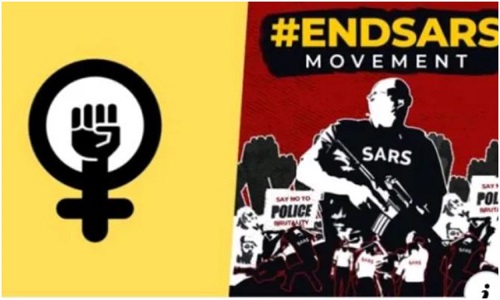 Young Nigerians on social media on Friday have called out the Feminist Coalition over the alleged misappropriation of funds donated to the ENDSARS protests last October.

Recall the FemCO was saddled with the responsibilities of coordinating the faceless protests that rocked the country for weeks and funds were donated for the course through their conventional bank accounts and crypto-wallets.

According to reports emerging, the group has been accused of transferring Bitcoin to the tune of $51,000 (N23,000,000) from their BTC wallet to a yet-to-be-ascertained wallet.

Findings from blockchain explore have it that the transfer was made on the 5th of March 2021 and no public notice was made to that effect.

Twitter user, identified as Rx_deyholar came about the findings. He tweeted:

‘Feminist co withdrew $51,000 worth of Bitcoin from their donation wallet on the 5th of this month silently’

Social media users without hesitation hopped on the allegations as they express their concerns on twitter.

About $51,000 (N23 million) worth of Bitcoin quietly withdrawn from the ENDSARS account while you ( the pawn in the great game) are out there as the foot soldier attacking Sega and anyone with a divergent opinion. Welp

Youth activist, Deji Adeyanju reacting to the news, has threatened to file a petition against the FemCO if they do not make a statement to debunk the allegations meted at them

I will personally do a petition to EFCC on this #EndSARS money. Don’t joke with me. You guys better come clean and give account for every kobo donated.

They want to cash out with N500m for something they didn’t lead even one protest. A protest that many people were killed & others are on exile. We have 4 of the Abuja leaders of the protest in Abuja in Ghana on exile.

Feminist Coalition reacts to allegation of misappropriation of EndSARS donations