Nollywood Actress, Jaiye Kuti opens up on her marriage to Pasuma 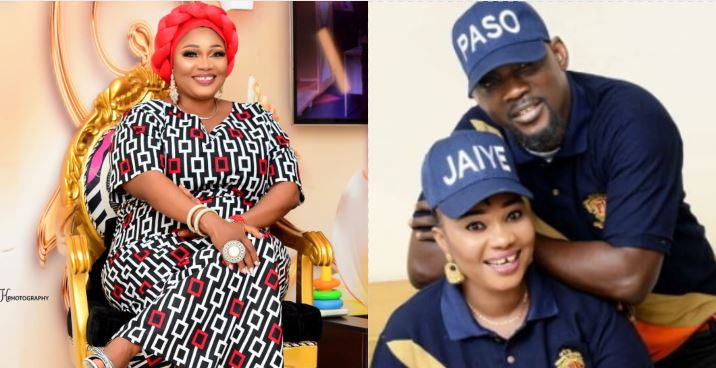 Veteran Nollywood actress, Jaiye Kuti, has opened up on her alleged relationship and marriage to popular fuji artiste, Wasiu Alabi, aka Pasuma.

“There was a time I shot a movie with Pasuma. We had a wedding (in the movie) and the pictures were out there. The next thing I saw in the press was that ‘Jaiye Kuti marries Pasuma’. People did not even go to the body of the story to read what was actually there. They just saw the headline and concluded that I had really married Pasuma. When one wants to be great in life, people would say bad things about one. People could say things that could kill one instantly. The beauty of it is that one has one’s legs and one can keep going.

“People that are spreading rumours about one won’t grow. I have heard shocking stories about me. Some people said I gave birth to Mayowa and Temitope Kuti and their father was Pasuma. I don’t have the time to start explaining to everybody that we were only making a movie. I don’t explain things to people. When they greet me, they tell me to extend greetings to Pasuma, and I tell them that I will. When last did I see Pasuma? He was paid to work and he left. Rumours are part of what we live on. It is part of what makes us what we are. One has to be strong to take it. It is like an arrow shot at one. One should not let it kill one; rather, one has to keep going.”

While some celebrity marriages continue to go soar, Jaiye Kuti stated that her husband has always being understanding and supportive despite her busy schedule.

She shares the secret of her 20 year old marriage:

“My husband has been so much of a blessing. I have been on locations for months. I have been on the set of a TV series, ‘Borokini’ for seven months. We only come home on weekends. I come home on Saturdays and return Monday morning. I was away from the house for about seven months on that project. My husband is such a wonderful man, who is very understanding. In relationships, love is not enough. Understanding is what makes a relationship work between a man and his wife; not love. It is that understanding that has kept us going and kept our marriage intact. I have known my husband for 23 years and we have been married for over 20 years. We are still going strong. We are still friends because we understand each other.”

‘Instead Of Bringing A Husband To Your Father, You Bought A Car For Him’- Man Drags Linda Ikeji