Nigerian singer, Davido has gifted his first daughter, Imade Adeleke with a customized pendant with a chain.

The singer who just reunited with his daughter upon his return from the United States shared a photo of the gift on Instagram.

Below is a clearer photo of the gift; 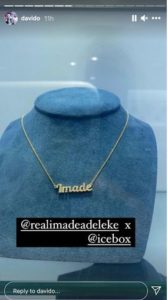 The whole drama started after Tacha took to her official Twitter handle to tweet the word, “E choke!!!!!!”.

However, an angry Davido fan retweeted the tweet and he stated that she must never use the slang again.

Reactions as another queen flees Alaafin of Oyo’s palace

Actress, Etinosa talks about how much she looks forward to coming back home to meet her daughter alive