Controversial journalist, Kemi Olunloyo opens a can of worms as she reveals that Davido’s Porsche assurance gift to Chioma was a publicity stunt.

This is coming amid the breakup rumour between the celebrity couple followed by the chef deleting all the photos of O.B.O on her Instagram page.

According to the US-trained journalist, Chioma Rowland was a pawn in the game of stunts played by Davido in 2018 to boost his music.

Read what she wrote below: 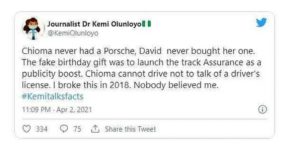 Meanwhile,A video of Chioma that surfaced on Instagram has generated lots of comments.

In the video, the mother of one was seen dressed in a seductive black dress to an event.

According to social media users, since the allegations about Davido and Chioma‘s breakup went viral, she has been more outgoing and stopped being an introvert.