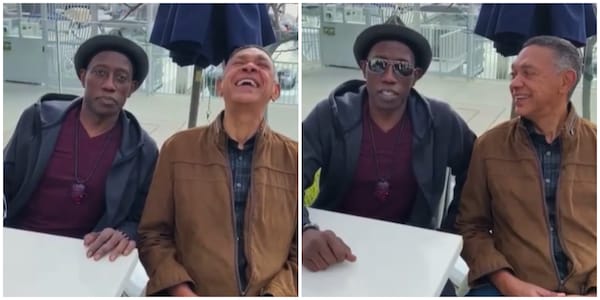 Former Nigerian Senator, Ben Murray-Bruce recently took to his social media timeline to share a video of him hanging out with Hollywood actor, Wesley Snipes.

In the opening part of the video, the Coming to America actor teasingly addressed his fans in the Yoruba language.

Snipes said “bawo ni?” which means “how are you?” in Yoruba.

He went on to also hail his Nigerian fans as he called on every one of them to make sure that they throw their support behind the politician in whatever he embarks upon.

Wesley Trent Snipes is an American actor, film producer, martial artist, and author. His prominent film roles include New Jack City, White Men Can’t Jump, Passenger 57, Demolition Man, U.S. Marshals and the Marvel Comics character Blade in the Blade film trilogy, The Expendables 3 and for his role on The Player.

Marriage over, party started – Man defaces his car as he joyfully announces his divorce (Photo)

‘Its a big deal’ – BBNaija Nina and her fans react after what American media personality, Khloe Kardasian did to her