I made N14.5 million in one day – Bobrisky brags, shares receipt

Controversial crossdresser Bobrisky has taken to Instagram once again to brag about his money.

In a recent post he made on social media, Bobriksy decided to flaunt the millions of naira he earned in just one day.

The self-acclaimed male barbie took a screenshot of his bank account balance, shared it on Instagram in order to prove that he is not in the same class as his haters.

The screenshot shows that the crossdresser got an alert of about N14.5M naira in just one day.

Sharing the screenshots, Bob wrote, “I’m the only person making millions daily and indoors without stress? Today’s 16th April is 14,500,000. Let’s see how much I will make tomorrow. Never compare me to those rats”

In another post, Bob wrote, “Haaaaaaaaaaa another one. 11 figures close to one billion. I covered 2 digiit o. Count the figures. I’m not one of those your favorite IG showing off without nothing for their account. Catch your sub. Learn from me.”

See his posts below 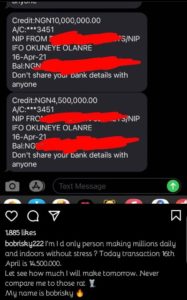 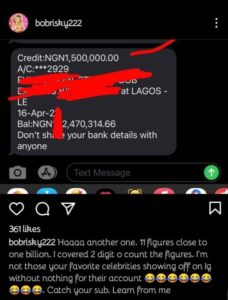