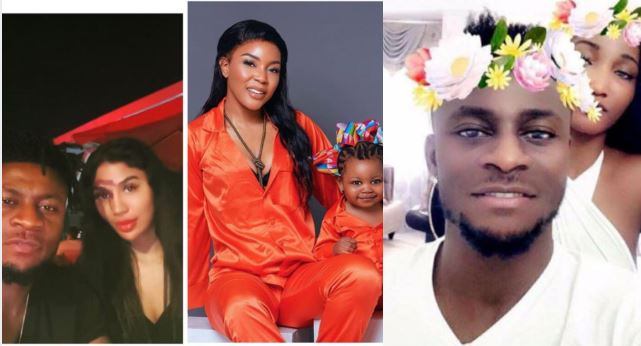 Taking to Instagram, Gistlovers reported that Obafemi Martins and his babymama and ex-lover, Lola Oj clashed at the party According to the blog, Lola Oj got angry after Obafemi confronted her for gossiping about his present girlfriend, Nadine. Out of anger, Lola Oj threw bottle at Obafemi Martins.
READ ALSO

Mar 4, 2021
Narrating the gist, Gistlovers wrote:
“Vawulence birthday party: Hello tueh tueh, big fight happened for Tania omotayo pikin birthday party yesterday o, no be small wahala o,wey bottle dey flew(in Jenifa’s voice) up and down.
It’s no longer news that Obagoal Has Abandoned his wife(balloteli’s sister )with kids also and moved on to his new found love, Nadine.
Y’all know I gave you the gist of who Lola oj baby daddy is and obagoal came after my page then and paid hacker to bring it down which they succeeded, well after lola don open yansh for married footballer, get belle for and born baby girl, naso trailer pass their middle and they have been having issues for sometimes now and not even in talking terms anymore.
Yesterday at Tania’s baby birthday,Lola Oj and Stephanie Coker were sitted together with some other friends when Obagoal and Nadine the new girl came to the events and went to sit somewhere at the back, Oba did not even do like he saw his daughter that Lola had for him, Later he left the event and after some minutes came back again, So oba came back and went straight to Lola and friends table to warn them because according to him,the new girl said Lola and her friends are gossiping about her. That is how Lola got angry and threw a bottle at him and the new girl. Na so Oba’s body guards tried to stop Lola. They sha created plenty scene and ever since then shades don dey fly up and down. I want to marry footballer I want to marry footballer see where he end,in btw the girl is Oba’s carbon copy and Oba no send Lola Oj one bit, how sad. Well Nadine is the latest baby girl now and Na she get oga remote control for now.I come in peace.”
Share
RELATED STORIES