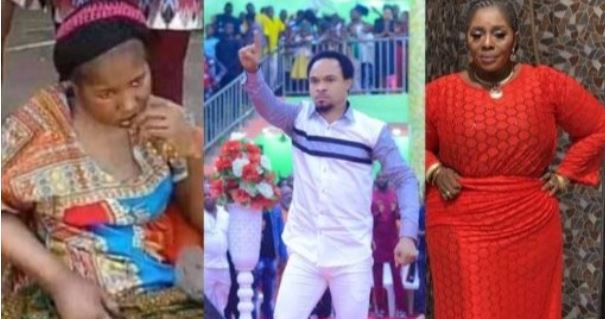 Over the weekend, footage of an incapacitated Ada Jesus at Odumeje’s church went viral on social media as she pled with the cleric alongside her family for forgiveness.

Veteran actress, Rita Edochie under fire for sharing a video…

In the viral video, Ada Jesus had said she usually brings people to the prophet for fake miracles. The comedienne also recounted how she was kidnapped by ‘Odumeje boys’.

Not long after, the comedienne was struck down with kidney disease that left her paralyzed.

It has now been alleged that the ailment did not come by naturally but was as a result of her accusation against the prophet. Her family then took her to the church in the hope sof seeking forgiveness from Odumeje.

In what then came as a shocking twist, Odumeje and Rita Edochie vowed never to forgive Ada Jesus stating that she is never going to recover from the ailment plaguing her.

Ezenwanyi has now come out to lambast the pair for their unwillingness to forgive, referring to them as “Deputy Jesus”.

Reacting to the whole situation, Ezenwanyi Iyeri Oba stated that those who play “Deputy Jesus” have refused to forgive, while Chi Marine who everyone thinks is a devil has shown that he has a ”pure heart.”

Ezenwanyi Iyeri Oba accused Odumeje of being heartless with his refusal to forgive the comedienne who lied helplessly on his church’s altar to beg for forgiveness after being left incapacitated by an ailment.

The herbalist also prayed that all the gods in Igbo land renew the health of Ada Jesus such that she can look Prophet Odumeje and Rita Edochie in the eye to show them they can’t give or take any life.

“Everything Nigerian men bring to the table, I already have” – Lady questions the value men add to relationships

“Sleep With Guys To Satisfy Yourself, Not For Love” – Kiddwaya Advises Female Fans