“Sleep With Guys To Satisfy Yourself, Not For Love” – Kiddwaya Advises Female Fans 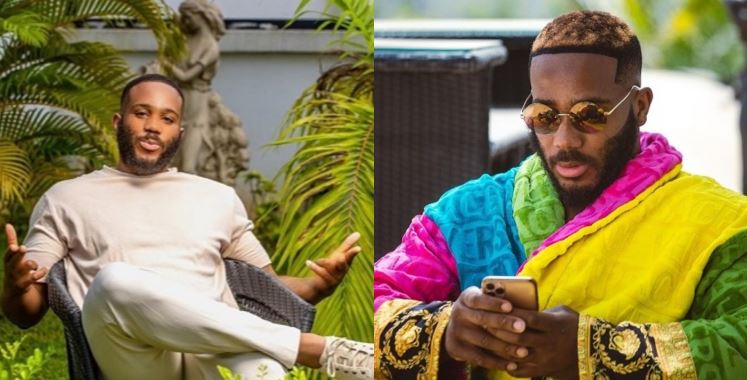 Big Brother Naija star, Terseer Waya, popularly known as Kiddwaya has dropped quite the controversial relationship advice for one of his female followers.

The reality TV star yesterday held an interactive session with his fans wherein they asked him questions pertaining to relationships and he gave them advice.

A particular female fan had told him that she had never experienced love before as most of the guys she got with only want s*x from her. According to her, once guys accomplish their aim with her, they always leave her in the lurch.

”I’ve never actually been loved back. I am beautiful, but guys want s3x then disappear.”

Responding to the fan, Kidd told her to flip the script and take love out of the equation. He advised that she have s*x with whomever she wanted to but it should only be for pleasure, not for love.

According to Kidd, doing the above would help her convince herself that she is in control and not the other way round. Read his response below;

SO flip the script and change the narrative. Take love out of the equation. Sleep with guys to satisfy yourself. Convince yourself that you’re in control, not them.

Let him bend you over then after you’re done with the satisfaction put your shoes on, pick up your Chanel bag, then walk out the door. Don’t forget to collect your pride on the way out. 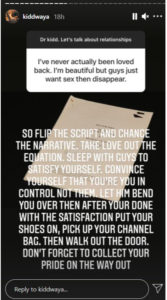 Barely a day after her birthday, actress, Mide Martins pens down tribute to her husband, Afeez Abiodun