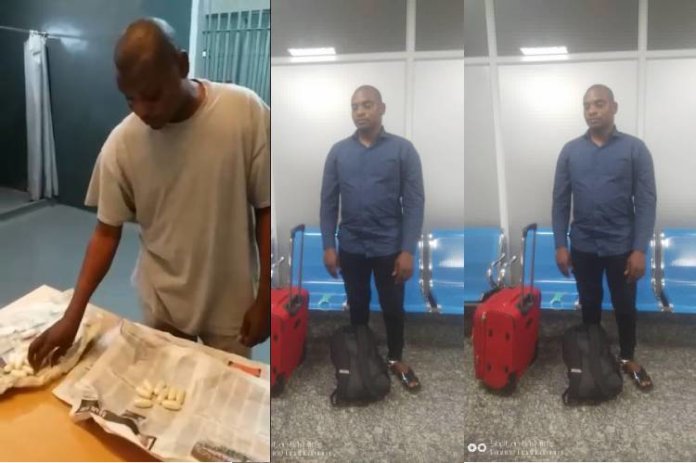 Two suspects arrested by National Drug Law Enforcement Agency, NDLEA have excreted a total of 191 pellets of heroin and cocaine while under observation.

They were apprehended at the Murtala Muhammed International Airport, Lagos.

The Agency’s Director, Media and Advocacy, Mr Femi Babafemi, confirmed this in a statement issued on Sunday in Abuja.

Babafemi disclosed that the two suspects excreted 191 pellets of heroin and cocaine while under observation.

“During the outward screening of passengers on Ethiopian airline to Italy, NDLEA operatives at Lagos airport intercepted and referred one Chukwudi Destiny for scanning and the scan result proved positive to drug ingestion.

“Consequently, the suspect was placed under excretion observation and in the process; he excreted 92 pellets of Heroin with a total weight of 1.300kg,” he said.

Babafemi added that another trafficker, identified as Ezekiel Chibuzo, who arrived in Lagos from Brazil on board Qatar airline, was also arrested for alleged drug ingestion, NAN reports.

Read Also: Photos Of The Ageless Nigerian Model Who Claims To Be 52 Years Old

Reacting to the latest drug haul at the airport, Chairman/Chief Executive of NDLEA, Brig. General Mohamed Buba Marwa (rtd) commended the officers and men of the MMIA Command for their commitment to the nation’s crusade against illicit drugs.

“While I commend the officers and men of our MMIA Command, let me again warn unrepentant barons and traffickers that the game is up for them because we’ll continue to disrupt their criminal trade as part of efforts to secure our country and protect the future of our youths,” Marwa stated, yesterday.