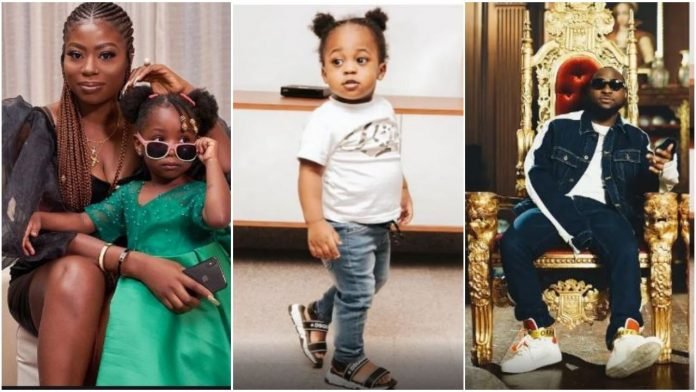 Nigerian singer, David Adeleke, professionally known as Davido has his ways of being in the news every now and then. Just after making the rounds on Chioma’s birthday for his rather diplomatic gesture while celebrating her, the singer has dropped another bombshell a few days after.

While we do not take away the fact that he remains on the map due to his musical prowess, Davido does have a knack for being the talk of the town over trivia or personal matters. The singer may have thrown his baby mama into a frantic situation after announcing that his last child, Ifeanyi, who happens to be his child with Chioma is his ‘heir apparent’.

Recall that Ifeanyi is Davido‘s first son and he has two elder sisters namely, Imade and Hailey.

Read Also: Gbangbola claims Don Jazzy is a demon, says he won’t be surprised if Nigerian musicians have a contract with the devil

Although Davido’s alleged 4th baby mama, Larrissa gave birth to a boy too, the singer is yet to accept the child as his.

Sharing a photo of Ifeanyi, the father of three wrote;

Just a moment after Davido shared a photo of Ifeanyi, his son with Chioma confirmed him as his heir apparent which means he takes over his 30BG empire and all that is in his name, and just a few moments after that his baby mama Sophia Momodu has shared a cryptic message.

According to Sophia, she has never fit in and never wanted to fit in anywhere as she does her own sh!t which is quite ambiguous, and coming just a few moments after Davido called Ifeanyi his heir apparent makes us think it’s about him.

Davido has a very good relationship with all his kids that is Hailey, Imade, and Ifeanyi, and the fact that he confirms Ifeanyi as his heir apparent doesn’t mean he’s going to leave his daughters just like that as we believe he has plans for them.

Even though Davido doesn’t have a good relationship with the mothers of his children, he doesn’t let any of that affects his relationship with his kids as he finds time among all his busy schedules to be with them and bond together.

Therefore. Sophia Momodu’s post of not fitting in and not wanting to fit in just a few moments after Davido’s post makes us wonder if there is more to what she wrote or she’s just saying whatever that is on her mind.