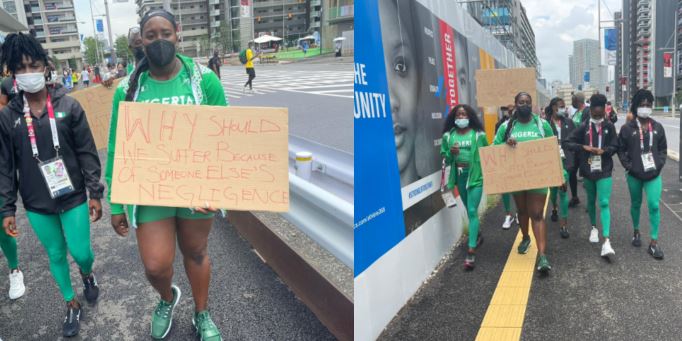 Nigerian athletes staged a protest in Tokyo, Japan, after ten of them were banned from taking part in the track and field competition at the ongoing Olympic Games, which begins on Friday.

The protesting athletes carried placards with inscriptions such as “Why should we suffer for someone else’s negligence”, “We are not just alternates but potential medalists,” and “All we wanted to do was compete.”

They expressed frustration at seeing their dreams of competing at the ongoing Olympics dashed by negligence from the Ministry of Sports and the Athletics Federation of Nigeria, AFN.

Meanwhile, two Nigerian athletes, Blessing Okagbare and Nzubechi Grace Nwokocha, have made it to the semifinals of the women’s 100m race in the ongoing Olympic Games in Tokyo.

This is the first time since 2012 Nigerians will be having two of her athletes contesting in the semifinals of the 100m women race.