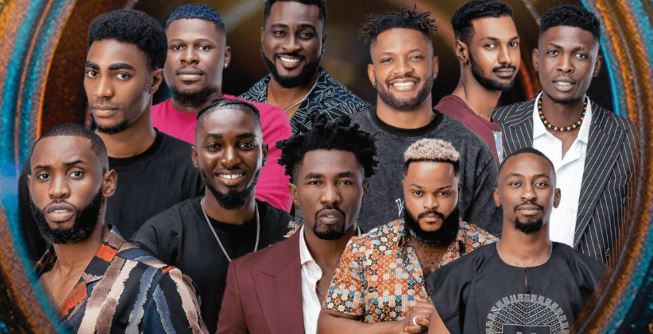 This year’s Big Brother Naija took a new turn as only guys were unveiled first on the first night. 11 of them have been called into the house and social media has been buzzing over the Shine Your Eye edition that seems to be brewing up lots of drama already even without the ladies being in the house yet.

Meet the housemates so far

BBNaija 2021: Maria opens up on why she nominated Whitemoney…

His full name is Boma Akpore and according to him, he was raised by his single mother and grandmother. He is currently 34 years old and he grew up on the streets of Yaba in Lagos. He stated that one of the hardest decisions he had to make was to drop out in his final year, as he couldn’t make ends meet, but his life’s high point came when he saved enough money to pay for film school, an achievement that was subsequently eclipsed by his graduation.

His full name is Ikechukwu Sunday Cross Okonkwo and he is based in Lagos. He is a fitness enthusiast and entrepreneur. He describes himself as “a bad boy with a good heart”. When he is not watching movies, traveling, or clubbing, you will find him playing drums or being hype on the mic on an Amapiano or House track or two.

Born Emmanuel Umoh, he is the first Nigerian to win the Mister Africa pageant, and he hails from Akwa Ibom. He currently resides in Port Harcourt, Rivers State, where owns and runs a fitness center and a unisex salon and spa. He loves to travel, connect with people and try out new and unique ideas.

His full name is Paul Ephraim and he is a 29-year-old Lagos-based musician and actor who believes the Big Brother Naija House will be the perfect opportunity to help boost his fledgling career in the Nigerian entertainment industry. In his own words, he is “entertaining, confident, playful, honest and friendly”. His hobbies include making music, making movies, dancing and cooking.

His full name is Adeniyi Lawai and he is a 33-year-old computer engineer from Oyo State. He is a husband and father, and he describes himself as “optimistic, spontaneous and adventurous”.

Pere Egbi is his full name and he was born in Warri, Delta State. He was raised by a single mother and is the firstborn of two children. He is a qualified nurse and served in the United States military for six years, before coming back to Nigeria to pursue a career in real estate. This vibrant 35-year-old is also a part-time actor and model.

His full name is Adeoluwa Okusaga who is 28-year-old. He is currently based in Port Harcourt as an offshore engineer, though he has found a new passion for sketch drawing and has become celebrated for his hyper-realistic portraits. Aside from drawing, his hobbies include dancing, singing, and exercise. According to him, the lowest point in his life was being informed that his mother – who he describes as his best friend – passed away.

Samuel Jacob Alifa is his full name and he is a 26-year-old amateur filmmaker and final year student at Ahmadu Bello University. He enjoys storytelling, videography, basketball, eating, and hanging out, and describes himself as “tall, handsome and charismatic”. He admits he talks too much at times and sometimes ends up gossiping because of the “great dialogue” he gets in his day-to-day conversations.

His full name is Hazel Oyeze Onou and he is a multitalented person. He describes himself as an open-minded “jolly good fellow” who likes to have fun. His hobbies include driving, hustling, watching movies, and making music. At age 29, he is a Lagos-based businessman and entrepreneur, originally from Enugu State, believes he has a great aura and that his “swag speaks for itself”.

His full name is Yerimene Abraham Saibakumo and he is a medical doctor. Yerins describes himself as “a perfectionist, creative genius, lover of art and poetic rap music”. He sees himself as a renaissance man who isn’t confined to one profession or career. He enjoys drawing, playing chess, listening to – and making – music. He also has plans to write a medical book soon. According to him, the highest point of his life came when he graduated from Medical University in Ukraine and finally got to see his parents for the first time in 9 years.

His full name is Yusuf Garba and he is a 29-year-old Secondary School Teacher who describes himself as a “soft-spoken, fun-loving, down-to-earth go-getter”. He is also a model, host, and personal trainer and confesses he can’t resist checking himself out in the mirror. Yousef counts winning the Mr. University of Jos and Jos Carnival King titles as the highest points in his life, while the lowest was when he lost his beloved aunt.

BBNaija 2021: Housemate Yerins Called Out For Borrowing Money From A Lady Without Payment