Nollywood is not real life – Fans slam actress, Jemima Osunde for saying she won’t cook when she gets married

Nollywood actress, Jemima Osunde has been under the scorch of social media users after she tweeted that she will not cook when she gets married.

According to the physiotherapist turned film star, she will not cook because she does not enjoy cooking. Osunde added that she will employ someone who will handle cooking when she gets married while noting that it’s not compulsory for her partner to know how to cook.

The actress also wrote that she will not be subjected to ‘suffer head Olympics’ in the name of marital duty.

Her tweet attracted reactions from users on the site as they lashed at her for saying that cooking is suffering.

See her post and the exchange with users below: 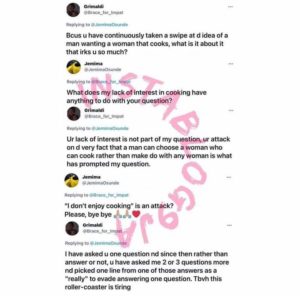