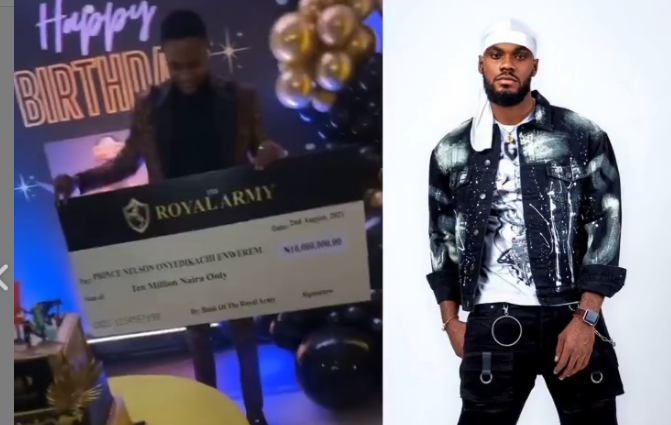 Nigerians on social media have reacted differently to the N10M gift fans of BBNaija, Prince gave him on his birthday.

This comes after the 26-year-old was given a huge surprise at his home with plenty of Dollars inside a box, shoes, Balloons, and flowers ahead of his birthday.

In the video that surfaced on social media, Prince was seen receiving the N10M cheque from his fans.

@talk2obiora wrote “I am trying to understand the rationale behind fans giving these bbn guys money and cars. What do they really get in return because from where I stand celebrities should be helping fans who actually really need this money because most of them their dstv sub hasn’t been renewed for a while so please somebody help me understanding here. Btw happy birthday brother.”

@pretty_perfy wrote “They gave you 10m and you are that calm when will these lies stop??”

@yummy_infusion wrote “This is huge o, where all these fan Dey get money”

BBNaija 2021: Cross reveals what happened between him and Angel inside the bathroom