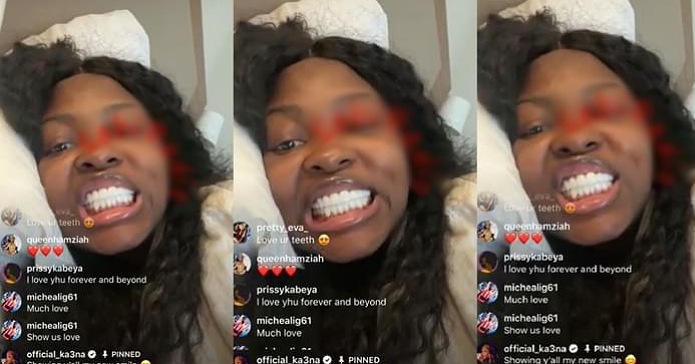 The controversial woman who recently landed in Turkey for a teeth procedure which according to her costs a whooping sum of money, flaunted new teeth for her fans, during an Instagram live session.

Ka3na jones during the live, stated that she would soon be flooding her timeline with official photos and videos of her new teeth.

According to her, she just decided to show her fans a sneak peak during the live session because she knows they’re already in suspense over the outcome of her teeth procedure.

In other news, reality TV star, Ka3na Jones has taken to Twitter to ask Nigerians why she has been tagged “fake”.

“What’s Fake About My Lifestyle? Is it the Properties Or my Company?? What Exactly Do They Call Fake?”

After four years, nurse gives her boyfriend 3-month ultimatum to propose to her